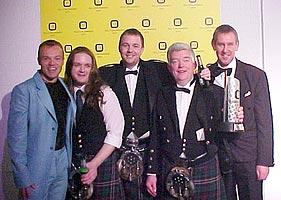 www.caithness.org has won both the prestigious Site Of The Year award and Best Community Site in the Yell.com/Awards 2001. The winning websites were announced at an exclusive awards ceremony, hosted by Graham Norton, at the Atlantis Gallery in London on 3 October 2001.

Capturing the true spirit of the internet, www.caithness.org has succeeded in uniting the people of an offline community in Scotland, within the online world. Established to meet the needs of the local Caithness population, the site now has world-wide appeal, providing information on local history, what's on in Caithness, a pub guide and the weather. The site even incorporates a 'where did they go?' section for Caithness ex-pats, including a woman currently working in Antarctica.

John Condron, CEO of Yell, said: "This year's awards have proved harder to judge than ever before. Caithness.org is a perfect example of the Best Community Site and fully deserves the Site of the Year accolade for capturing the true spirit of the internet. Yell.com wishes it the best of luck for the year to come."

Bill Fernie from Caithness.org said: "Caithness.org has seen record visitor numbers, page impressions and hits over the last six months, increasing beyond even our wildest expectations. To win Site of the Year and Best Community Site is the icing on the cake and these awards are fantastic recognition of the hard work that we have put into the site."