Halloween Cocktails at Wetherspoon's In Wick 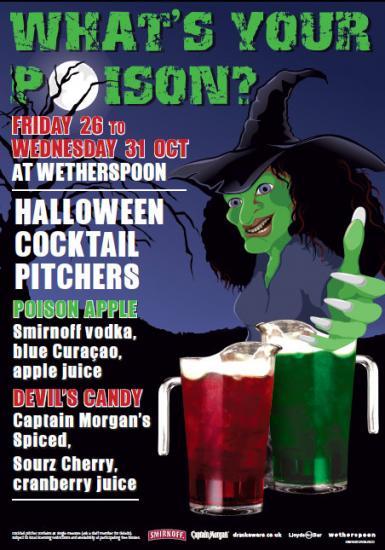 Two pitchers of cocktails for Ł10 is on offer over the Halloween period at the Alexander Bain pub in Wick from Friday 26th to 31st October.

Poison Apple and Devil's Candy might be just the thing for your big night out with friends.

J D Wetherspoon has today announced a trading update: Like-for-like sales in the first 11 weeks of quarter 4 of the current financial year were minus 0.4%, compared to the same, pre-pandemic, period in 2019.   Losses for the current financial year (FY22) will be higher than expected at approximately minus ÂŁ30m, reflecting higher labour, repair and marketing costs.
[Public Houses]
20/10/2012

The Alexander Bain pub, Wetherspoons in Wick will be taking part in the Real Ale Festival running in the UK - Wednesday 24th October - 11 November 2012.   With beers from 10 countries and many from around the UK.
[Public Houses]
10/5/2006

Local employer recognised for age friendly policies Wick bar, The Alexander Bain, has been praised as part of a national campaign aimed at tackling age discrimination in the workplace.  The Age Positive campaign has awarded JD Wetherspoon "Employer Champion" status, which means it joins an elite list of employers from across Great Britain who exemplify an open-minded approach to hiring staff of all ages.