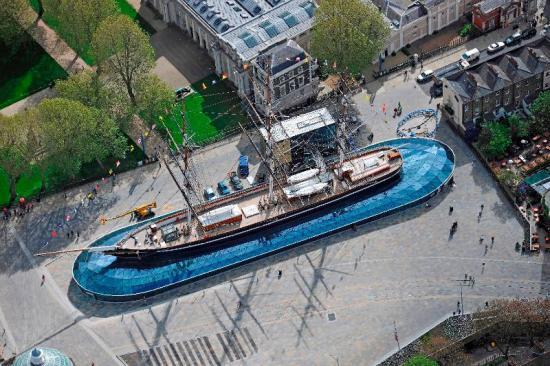 Thousands of tourists beating a path to Greenwich, home of the Olympic Equestrian Centre and Royal Museums Greenwich, may find their feet on Caithness stone if they also stop by the world’s last surviving tea clipper.

One of the world’s most famous ships, the Cutty Sark was devastated by fire in 2007, but opened again to the public this year in grand style after six years of intensive conservation work. Having been located in Greenwich since 1954 visitors can now view her from around, aboard and even underneath.

7,000 sq metres of Scotland’s Caithness Flagstone has been laid around the ship, which itself has northern roots having been built in Dumbarton on Scotland's west coast.

It has been a massive, high profile project for A&D Sutherland of Spittal in the north of Scotland.

Managing Director of the family owned business, Mark Mancini, commented: "We were absolutely delighted to win such a prestigious project which has involved every member of our team over the past two years. The flagstones, which were a variety of precise shapes and colours as requested by the project’s architects, were transported by a combination of road and rail to London."

"The Ł50m conservation project was re-opened by the Queen at the end of April. We haven’t actually been to see the finished job yet – but are planning a visit in November."

The Caithness company supplied the flagstones to be laid by specialist firm VolkerHighways, which had the overall contract for landscaping around the historic ship.

A&D Sutherland has been supported by Highlands and Islands Enterprise (HIE) over a number of years. As well as working on a growth plan with the company HIE has helped fund vital cutting equipment to allow them to deliver the wide range of services on offer.

HIE’s Head of Business Growth, Annemarie Monteforte commented: "Having seen them myself at Greenwich, I can say the flagstones look absolutely spectacular and it is no surprise that this job has lead to additional interest from other London projects. We are delighted to have supported A&D Sutherland to buy the precision equipment which allows their skilled staff to meet very demanding specifications for this beautiful stone. It has opened up a new market and range of opportunities for the local firm."

Planning consent has been granted for a new life sciences innovation centre on Inverness Campus.   The 2500mÂ˛ facility is a joint project between Highlands and Islands Enterprise (HIE) and the University of the Highlands and Islands.
[Advisory / Counseling Services]
20/11/2020

Cairngorm will benefit from more than ÂŁ20 million to make it a year-round attraction, generating significant economic benefits for the local area and Scotland's tourism sector.   Funded by the Scottish Government and Highlands and Islands Enterprise (HIE), more than ÂŁ16 million of the investment will be used to support reinstatement of Scotland's only funicular railway and bring it back into service during winter 2021-22.
[Advisory / Counseling Services]
23/9/2020

A project to create accommodation facilities at Kishorn dry dock in Wester Ross has secured investment of up to ÂŁ94,675 from Highlands and Islands Enterprise (HIE).   Having on-site accommodation will enhance the dock's capacity and help it attract more high-end contracts in offshore renewables and oil and gas decommissioning.
[Advisory / Counseling Services]
13/9/2020