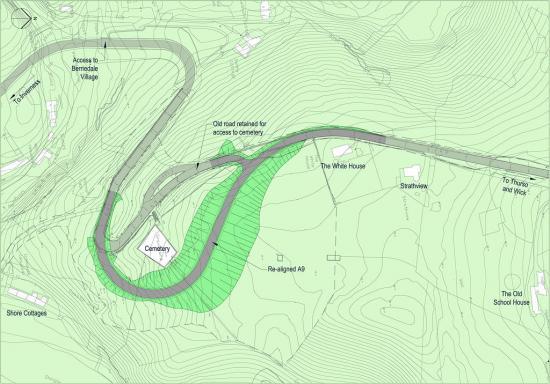 Users of the A9 will welcome the news that a preferred option has been chosen for the challenging hairpin bend at Berriedale Braes on the northernmost part of Scotland’s longest trunk road.

A public exhibition is being held today at Berriedale (2nd April 2014) to give people the opportunity to view the proposals and provide their comments.

A preview of the exhibition was held for councillors and others and all three Wick councillors took a particular interest along with Caithness Chamber of commerce manager Trudi Morris. Gail Ross, Neil Macdonald and Bill Fernie as Wick councillors were interested to find out what the improvement might mean asking a series of questions of the designer of the new plan. Over the years there had been several acidents and near misses not least the school bus from Orkney that crashed the barrier on the bend. Even yesterday a lorry had been involved in accident at Berriedale.

This follows hot on the heels of ground investigations works carried out in recent months which helped inform the design of the preferred option.

Transport Minister Keith Brown said:“The natural geography at Berriedale Braes, with a steep gradient and hairpin bend, is a very challenging road alignment, especially for HGVs and other long vehicles.

“The fact that a preferred option is now on display is clear evidence of our commitment to find a solution and improve this important section of the road between Inverness and Thurso. Couple this with our £3 billion investment to dual over 80 miles of the route between Perth and Inverness - the first government ever to commit to do so – underlines just how hard we are working to upgrade the A9.

“We will continue to work with our partners to progress the Berriedale Braes scheme as a matter of urgency, and once we have considered all the comments to our proposals, push on and publish the final scheme outline later this year.”

The Highland Council is advising low income households, including home-owners, to apply for help to reduce their Council Tax.  Eligible households can receive up to 100% reduction from their Council Tax which means that those households who receive the full reduction will only have to pay their Scottish Water and Wastewater charges.
[]
6/5/2015

Voters in the three Highland constituencies for the UK Parliamentary General Election of: Caithness, Sutherland and Easter Ross; Ross, Skye and Lochaber; and Inverness, Nairn, Badenoch and Strathspey are being reminded by Returning Officer Steve Barron that their vote matters.   Tomorrow (Thursday 7 May) voting begins with 283 polling stations opening their doors at 7am and remaining open for voters until 10pm.
[]
30/4/2014

Act now to secure your vote in European Parliamentary Election

Don't lose your vote poster With the European Parliamentary Elections taking place on Thursday 22 May, Bill Gillies, Electoral Registration Officer for the Highland and Western Isles area is urging voters to make sure they are registered to vote in time.   “People are talking about the elections, but you’ll only be able to have your say on who represents you in the European Parliament if you’re registered to vote by the deadline of Tuesday 6 May and for postal applications by 7 May”, said Mr Gillies.
[Medical & Health Services]
18/10/2012

Should You Get a Flu Jab?

What is flu? Flu is much more than a bad cold.  It's a virus which can make even healthy people feel very unwell for a week or more.