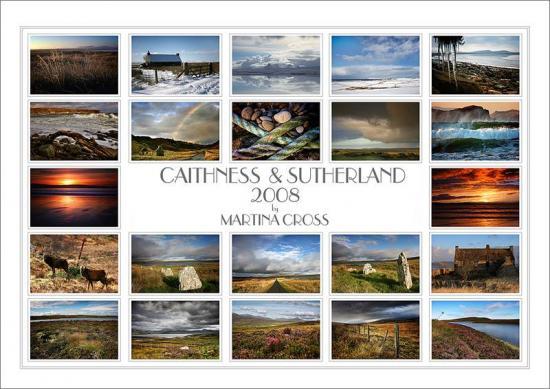 Martina Cross 2008 Caithness & Sutherland Calendar is the best yet.

Martina Cross had a sell out of her 2007 Caithness & Sutherland Calendar so if you want one for yourself or as a present get your order in soon.

Martina has specialised in capturing the superb panoramic views that the north has to offer. The sharp contrasts of the skies in her photographs are breathtaking. when combined with the vivid colours she has captured the calendar will light up any wall for the whole year.

Each month has its own great photo with the addition of five miniature views making 72 photos in all.

Tak a look at them all on Martina's Caithness & Sutherland 2008 Calendar page at her web site www.martinacrossphotography.co.uk/html/calendar1.html

Even if you do not want a calendar a browse through the increasing range of Martina Cross photos of Caithness and Sutherland will certainly make you want to visit the area if you do not already live here. From Snow to Sunset and Stone To Sky there are many vivid contrasts revealing the beauty of the far north.

Check out the full web site by starting at www.martinacrossphotography.co.uk

Another Unique Calendar For 2009 From Martina Cross

The Caithness And Sutherland calendars from Martina Cross produced for 2007 and 2008 were sold out almost immediately.   It was hardly surprising to anyone who has seen her work on her own web site and many examples on Caithness.org.
[]
5/11/2006

Update on Sell-out Calendar The Calendar has been an instant success and all copies are now sold.   Martina promises to start earlier next year and come back with a larger print run.