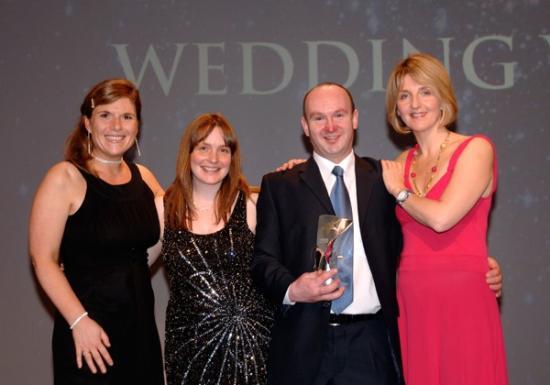 When a local video production company announced that they were nominated for a major Scottish Wedding Industry award last month little did they know that they would actually be walking away with the pretigious "Voted Outstanding Wedding Supplier (VOWS) award.

Video Viewpoint proprietor, Colin Sinclair, along with his wife Susan attended the glitzy award ceremony recently in the Edinburgh Corn Exchange along with other top industry professionals and nominees. " The whole night was truely amazing". said Colin. "We had no idea what to expect. We didn't go thinking that we would win." It emerged that they were debating whether to even go to the event at first. "We had so much work to do and wedding productions to complete that we felt that we couldn't afford to use the time to go swanning off to Edinburgh but I'm so glad we did".

Video Viewpoint were among four other video companies shortlisted in the wedding videographer category at the Vows awards which are presented to businesses who have gained recognition during the year from previous clients through a voting process and also by testimonials sent in either via the vows web site or through voting forms.

"After a champagne reception for all nominees we were escorted into the banquet hall and entertained with music and song while enjoying an exceptional meal. The award ceremony, hosted by Kaye Adams, presenter of ITV's "Loose Women" then commenced". Expalined Susan.

In the company of the creme of Scottish wedding service suppliers and against three companies from Glasgow and one from Edinburgh the Thurso couple felt they had no chance in scooping the prize.

The time came for presenting the videographer category. The envelope was opened and Video Viewpoint were announced the winner. "I was absolutely flabergasted, it all felt so sureal. Walking up in front of six hundred people and being presented with the trophy was just amazing". Colin said.

" I have to thank everybody for making the whole experience possible. If it wasn't for previous clients having the faith, trust and confidence in us then none of this would be possible. We just can't thank them enough"

When asked what will happen now, Colin replied, " I won't let it go to my head. It will give the business a chance to move forward but continue to provide the outstanding service that helped us win the award in the first place".

Following what must have been a surge of client recommendations, a Thurso based wedding videographer has been short listed for the chance to win a prestigious award at a major Scottish wedding industry event.   Colin Sinclair who runs Video Viewpoint Productions is one of only five finalists remaining in the wedding videographer category at the Voted Outstanding Wedding Supplier ( VOWS ) awards to be staged at a glittering ceremony in the Edinburgh Corn Exchange next month.