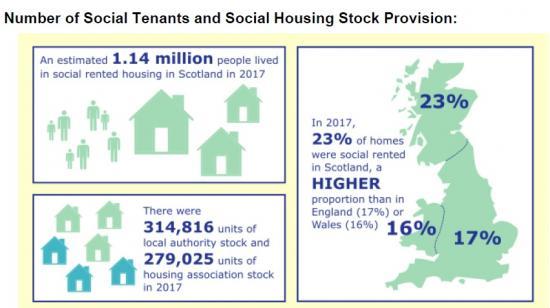 Scotland's Chief Statistician has released Social Tenants in Scotland 2017, the third annual statistical compendium publication on social tenants and social rented housing in Scotland, covering topic areas such as stock, household characteristics, housing flows, and rents and income levels. The publication is based on an analysis of a range of existing data sources, and includes trend data for earlier years and comparisons with other housing tenures and with other parts of the UK where possible.

At a Scotland level 53% of social rented housing stock in 2017 was owned by local authorities, with 47% being owned by housing associations.

The average age of the highest income householder in social rented housing in 2017 was 53 years, the same average as 53 years in 1999.

38% of adults in social rented households in 2017 were employed (24% employed full time, 11% employed part time, and 2% self-employed). 25% of adults were retired from work, 12% were permanently sick or disabled, 9% were looking after the home or family, and 9% were unemployed and seeking work.

In the period from 2013 to 2017, 53% of adults in social rented housing said they had no religion, an increase on the 45% between 2009 and 2012. The percentage of adults with a Church of Scotland religion decreased over this time period from 29% to 22%, whilst the proportion with a Roman Catholic religion stayed similar from 18% to 17%.

35% of lets by local authorities in 2016/17 were to housing list applicants, compared to 52% of lets by housing associations. (Where applicants were not already existing tenants).

Adults in social rented households in Scotland in 2016 had been at their current address for an average of 11 years, a shorter average time than in 1999 (12 years).

Across the period 2015/16 to 2017/18, social rented households in Scotland spent an average of 24% of their net income on housing costs. This figure compares to equivalent figures of 27% for private rented households, 8% for households owning their property with a mortgage and 3% for households owning their property outright. (Note that housing costs include rent gross of housing benefit, as well as water rates and service charges where applicable. Net income relates to all household income after personal taxes and council tax have been netted off. See Section 5 of the publication for further details of how this percentage figure has been calculated).

In 2017, 30% of social rented households in Scotland stated that they managed well financially, an increase from 21% in 1999.