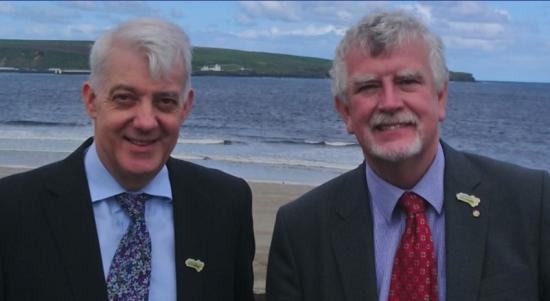 In April 2019 Peter Faccenda took over the role of Caithness and North Sutherland Regeneration Partnership manager.

He takes over from Eann Sinclair who was appointment as Caithness and Sutherland area manager for Highlands and Islands Enterprise (HIE).

CNSRP Independent Chair Ian Ross said:"I'm delighted to welcome Peter to the CNSRP team and look forward to continuing to build on the excellent achievements so far. I'd like to thank Eann for his valued contribution over the past ten years as manager and wish him every success in his new role at HIE, who continue to be an important partner in CNSRP.

"CNSRP partners are committed to continuing the work to move the area economy away from its dependence on Dounreay decommissioning, which has resulted in around 1,400 full-time equivalent jobs being either created or retained in the Dounreay travel-to-work area.

We estimate that a further 1,300 full-time jobs could be possible by 2030, which will continue to support population growth in the area.

Peter joins CNSRP from his previous role as head of business growth for HIE’s Inner Moray Firth team in Inverness. A metallurgist by degree, Peter has 30 years of manufacturing management experience including at managing director and director level in metal-based SMEs. He was responsible for delivering the Manufacturing Advisory Service in Yorkshire and Humber for four years and has worked as a specialist business development manager for the National Skills Academy for Nuclear, so is no stranger to the rigours and challenges facing industry.

Peter said: “This is a really exciting time to take up the CNSRP role. CNSRP partners have targeted opportunities for the vertical launch of satellites, which has resulted in the plans for the Sutherland space hub. Supporting the Beatrice Offshore Wind Farm and establishment of an operations base at Wick has also been a focus. There has also been notable Investments at Scrabster Harbour, as well as support for business and nuclear services and for tourism, with ongoing work to develop the opportunities around the North Coast 500.

“I’m particularly excited to bring forward new opportunities to attract economic growth to the area, and to help continue the track record of investing in key infrastructure."