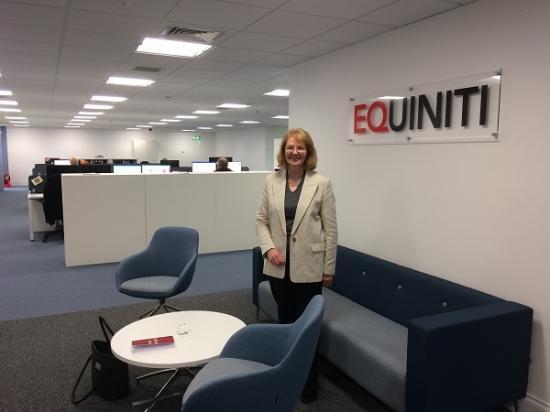 Highlands and Islands Enterprise (HIE) has welcomed an international technology-led services and payments specialist as the newest tenant to Thurso Business Park.

The agency has developed the park to enable local firms to expand and to attract new companies into the area.

Equiniti Group plc is the latest company to move onto the park, bringing its 32 employees to William Smith House.

The firm provides non-discretionary payment and administration services to some of the world's best-known brands and UK's largest public-sector organisations. Its EQPaymaster division is one of the largest providers of outsourced pension administration in the UK, working with schemes in the public and private sectors with complex defined benefit, defined contribution and hybrid arrangements.

After securing pension administration contracts for the UK Atomic Authority and CNPP last year, Equiniti has been running at a rapid pace. The move to Thurso Business Park will grow the company’s capabilities, and help support the future expansion of its Caithness workforce.

Julie McGee, senior development manager at HIE’s Caithness and Sutherland area team, said:"We are delighted to support Equiniti in moving to Thurso Business Park. The move gives the team room to expand and opens up the prospect of further job creation. This is a good move for the company and good news for the local economy and for Thurso Business Park."

Operations manager at Equiniti, Sa Campbell, said:"As part of our growth plans, the decision to move into the excellent facilities at William Smith House on Thurso Business Park was an important one.

"Equiniti takes great pride in its Caithness links and views the move to a larger office facility as a great positive, enabling us to further develop our plans for future growth. Now that our award winning pension administration platform, Compendia Touch, is operational, the team has the opportunity to take on more contracts, in addition to the existing work. This in turn will provide local people the opportunity to work in an environment which is continually evolving."

Over 300 people are now employed at Thurso Business Park, working for companies such as AGM Batteries and Denchi Power, which jointly occupy Denchi House; BT Plc, which has a call centre in Alexander Bain House; and Wolfburn, which operates its whisky distillery from the park.

Limited space is available on the Business Park, with only two plots remaining; a third plot is currently under construction.