Rock works start in September at the Stromeferry Bypass 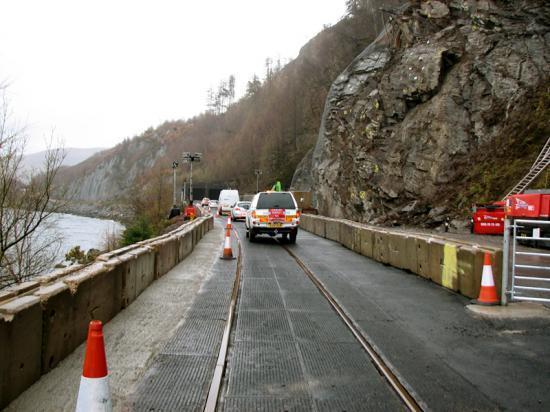 The Highland Council has appointed Geo-Rope Ltd to carry out rock scaling and netting works at the A890 Stromeferry Bypass.

Road closures and traffic management will be in place from the 9th of September to the 3rd of November. During this time, the road will be closed overnight between the permanent road closure gates at Ardnarff and west of Attadale to allow the contractor to work on the rock face.

Traffic will be allowed through the works during the day under convoy operations so some short delays are envisaged.

A full weekend closure for all vehicles, cyclists and pedestrians is also planned on the 14th/15th of September to enable the contractor to carry out some major rock scaling. Details of the road closures can be found on The Highland Council website - https://www.highland.gov.uk/info/1523/transport_and_streets/104/stromeferry_bypass

Garry Smith, a Principal Engineer with the council's Development and Infrastructure team said: "The works planned this year form part of an on-going programme of inspection and maintenance on the rock face adjacent to the A890 to ensure the safety of the traveling public. The Council and its contractor will endeavour to keep delays to a minimum during daytime traffic management."

Earlier works on the rock face.