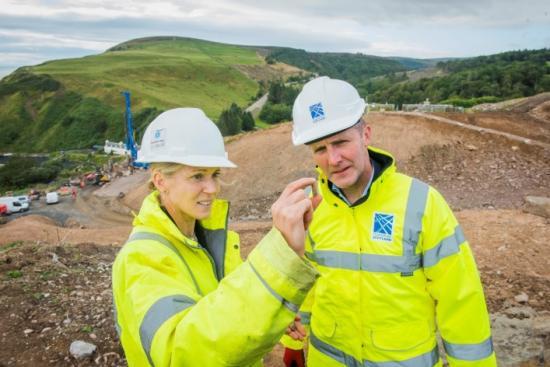 Michael Matheson visited the £9.6m major road improvement project of the A9 at Berriedale Braes, Caithness on Thursday 29th August 2019 to see some of the ancient finds discovered during the archaeological excavations undertaken in advance of construction.

The Cabinet Secretary for Transport, Infrastructure & Connectivity also viewed the progress of the construction work to remove the notorious hairpin bend on the A9, which is on schedule to be completed by next spring, subject to exceptionally adverse weather.

During the visit Mr Matheson also heard how RJ McLeod, the project contractor, is ensuring that environmental considerations are prioritised in order to mitigate the effects of construction on the surrounding environment. He observed how the contractor is using alternative techniques to remove rock and consequently avoid disturbance to the nearby coastal bird colony during breeding season.

Mr Matheson also viewed the findings from the archaeological excavations which show that this section of the A9 was once the site of a seasonal camp dating as far back as the Mesolithic period in 6,000 BC. Numerous flints and other small tools were found which are believed to have been used for hunting, working with animal hides and other daily tasks. Together with the remains of small shelters and fires, it is believed by the archaeologists that these artefacts provide information on the earliest humans living in Caithness.

Speaking from the construction site, Mr Matheson said:"The finds unearthed here at Berriedale Braes are truly fascinating and provide a rare glimpse into Scotland's ancient past. Indeed, the archaeologists believe the finds are all that survive of some of the earliest traces of humans to have lived in the area and provide evidence of life in the far north of Scotland thousands of years ago.

"The discoveries which could have remained uncovered had works not progressed on the A9 Berriedale Braes project underline the importance of the value we place on meeting our environmental obligations as we plan and construct essential new infrastructure."

Mr Matheson added:"Improving connectivity between rural communities and cities is critical to boosting productivity and competitiveness and I am delighted to be in Caithness today to see the significant progress that RJ McLeod has made in delivering this key safety improvement for road users in the north east of Scotland.

"Once complete, this project will deliver improved journey times and will remove the need for vehicles to slow down to negotiate the previous hairpin bend."

The archaeological finds will be displayed for the public to view at Dunbeath Heritage Museum in the coming weeks.