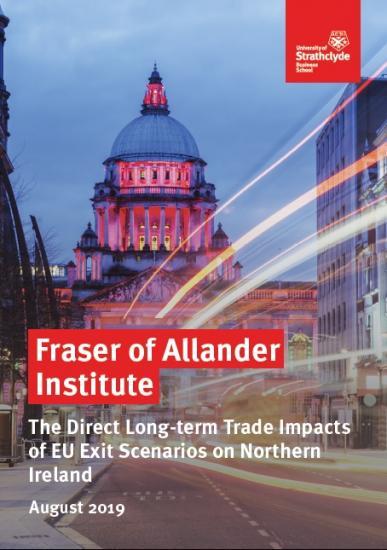 ■ This report focusses on the long-term economic impact of Brexit, as well as the potential implications of the UK Government's Withdrawal Agreement, and specifically the so called "Backstop" on Northern Ireland's economy. The analysis is undertaken using a multisectoral dynamic macroeconomic model of Northern Ireland (NI). The model captures the domestic economy and key trade relationships between NI, the rest of the UK and the rest of the World (including the EU), and allows the analysis of a range of scenarios relative to a counterfactual position.

■ We find that, based upon the assumptions and methodologies set out in this report, all Brexit options will negatively impact the NI economy with simulated reductions in Gross Domestic Product (GDP) ranging from 3.3% (hard Brexit) to 1.1% (soft Brexit). The

scenarios examined that involve NI trade taking place within the context of the "Backstop" demonstrate simulated reductions in GDP ranging from 2.7% to 1.3%.

■ These impacts are significantly smaller than those presented by the UK Government as part of its long term analysis published in November 2018. This research indicated that under a "no deal" scenario, the Northern Ireland economy could see a potential long term reduction in GVA of approximately 9%. Differences are partly driven by the fact that this report analyses the economic impact of Brexit in Northern Ireland using a single region model that considers the regional economy in isolation and only focuses on the impact of changes in trade.

■ Results demonstrate the impact on the Northern Ireland economy of direct trade impacts only, and do not capture the economic consequences of Brexit on the UK economy as a whole. Therefore the potential knock-on effects of reduced economic activity in GB for the Northern Ireland economy are not captured. To provide a flavour of such effects we test the sensitivity of our results under the hard Brexit scenario to a potential 5% and 10% reduction in sales to GB1

This results in an overall reduction in GDP for a hard Brexit scenario of 4.0% and 4.6% respectively.

■ Perhaps the more interesting finding - and what this analysis is designed to shed light upon - is the differences in the potential sectoral impacts of the various scenarios.

Read the full report at - https://www.sbs.strath.ac.uk/economics/fraser/20180827/Long-term-trade-impact.pdf