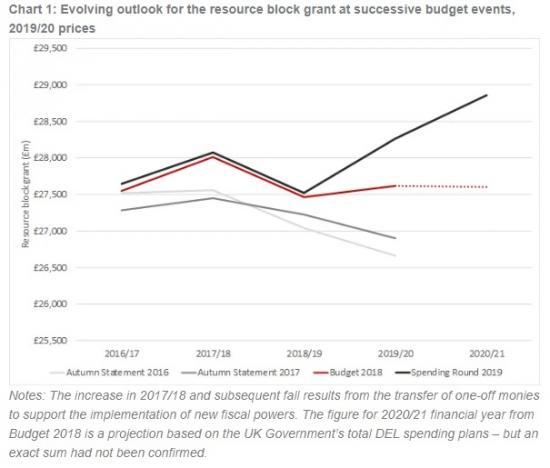 Last month's UK Spending Round announced increases in UK Government resource spending of 4.1% in real terms next year. Will the Scottish block grant increase by more or less than this, and why? And what will this mean for the Scottish budget?

And whilst revenues from devolved taxes have an increasingly material impact on the resources available to the Scottish Government, the block grant remains the most critical factor in determining the overall size of the Scottish budget.

First, a slight digression to note that the Scottish Government's resource block grant for 2019/20 has already increased significantly since the 2019/20 budget was approved by parliament at the start of this year.

The increase of £600m can be explained by various ‘in-year’ spending changes by the UK Government which feed through to the Scottish block grant via Barnett consequentials. Slightly over half of the £600m in-year increase to the block grant flows from higher spending to meet increased pension costs of public bodies. As such this does not translate into additional spending power for the Scottish Government.

The remainder of the in-year increase reflects consequentials associated with a range of UK Government spending functions, including by the Ministry of Justice, and Brexit-related funding.

The £1.1bn increase in the block grant is equivalent to an increase of 2.1% in real terms. This is a healthier rate of growth than the Scottish Government has been used to in recent years.

Unfortunately the Scottish block grant will be reduced by £200m next year to reflect forecast error in respect of the 2017/18 budget. Net of this adjustment the block grant will increase by somewhat less than 2%.

But if total UK Government resource spending is increasing 4.1% in real terms, why is the Scottish block grant increasing just 2.1%? The explanation is two-fold.

The first part of the explanation relates to the infamous ‘Barnett squeeze’. The Barnett Formula allocates the Scottish budget a population share of increases in English spending. But because Scottish Government spending per capita is around 20% higher than ‘comparable’ English spending, a given per capita increase in the block grant accounts for a smaller proportionate increase to the Scottish grant.

The second part of the explanation relates to business rates. Of the £13.8bn increase in UK resource spending, around £3bn is anticipated to be funded through increases in businesses rates revenues in England. Since business rates are devolved, they attract a negative consequential in the Barnett formula.

So the difference between the 4.1% increase in UKG spending and the 2.1% increase in the block grant is explained by these two factors, Barnett squeeze and business rates revenues (with the remaining small difference accounted for by differences in spending increases across reserved and comparable functions at UK level).

The changes in context

Developments this year and last mark a decisive shift from what Derek Mackay might have expected at the start of this parliamentary session. The outlook then was for real terms declines in the resource grant in 2018/19 and 2019/20.

In fact, the Scottish resource block grant in 2020/21 (before any adjustments for devolved taxes, or new social security powers) will be 4.4% higher in real terms than it was in 2016/17, the last budget of the previous parliament (see Chart).

Details of these elements of the 2020/21 budget will emerge over the next few months.