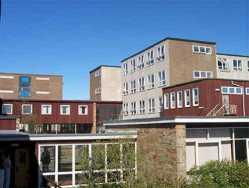 Thurso High School, which was damaged on Christmas Eve during a storm, is to reopen to all pupils and staff on Monday 6 January On 24 December a large section of the roof of the 802 pupil school was blown off during high winds.   The school was closed for the Christmas holidays at the time and no one was injured but some damage was reported to private cars in the neighbouring area.
[Educational Institutions]
24/12/2013

A large section of Thurso High School roof has been blown off with the high winds.   Police and Highland Council staff are in attendance and Ormlie Road has been closed.
[Local Authority]
14/11/2013

The Highland Council has appointed Mr Ken Murphy, to the post of Head Teacher of the 804-pupil Thurso High School.   Mr Murphy, who has been the Acting Head Teacher since August of this year, succeeds Dr Fiona Grant, who has reverted to a teaching post at the school.
[Local Authority]
6/11/2013

A week long summer school was held in late July for students of Thurso, Wick and Farr High School students in 4th, 5th & 6th years to prepare them for the world of work.   The course, organised by DSRL (Dounreay Site restoratiopn Ltd) on behalf of the NDA (Nuclear Decommissioning Agency), was supported by North Highland College and Skills Development Scotland.
[Educational Institutions]
14/7/2013

The new acting head teacher of Thurso High School will be Mr Ken Murphy, who is currently Depute Head Teacher at the school.   He has been appointed as Acting Head Teacher, pending re-advertisement of post, and the appointment of a permanent Head Teacher.
[Educational Institutions]
8/10/2012

(By Saul Stevens 1S4) On the 17th of May 2012 Thurso High School held a coffee afternoon in the canteen for an hour after school, which was run by first year pupils.   The coffee afternoon revolved around Fairtrade, which aims to ensure a fair amount of money goes to the producers from developing countries and their communities, so they can have access to schools and healthcare.
[Local Authority]
16/8/2010

More than 31,000 pupils go back to school in the Highlands today (Tuesday 17 August 2010).   Some will be returning to schools which have been upgraded over the summer holidays and others will benefit from major projects which will begin during the school session.
[Local Authority]
16/8/2010

Pupils in Highland secondary schools are to receive guidance on mobile phone safety as they return to school this week.   Advice in a joint letter from The Highland Council and Northern Constabulary to parents and carers of secondary pupils aims to raise awareness and specifically highlight the dangers of young people finding themselves in uncomfortable, compromising or illegal situations as a result of inappropriate use of mobile phones.