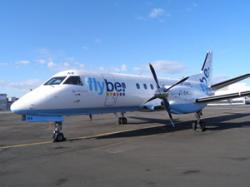 Loganair is Scotland’s leading regional airline with a comprehensive network of scheduled services serving 26 routes and its fleet of 20 aircraft carry over half a million passengers each year.

It is one of the longest established airlines in the UK with 40 years continuous service and serves the Highlands and Islands as well as Dundee, Birmingham, Belfast and the Isle of Man.

Loganair became a franchise of Flybe, Europe’s largest regional airline, in October 2008 and connections are available to the Flybe and British Airways networks throughout the UK, Europe and beyond using its services.

Loganair gears up to help cyclists -Ride Across Britain-

Wick Airport is preparing for one of its busiest days ever on Friday (June 11) when it welcomes hundreds of cyclists who are taking part in the inaugural Deloitte Ride Across Britain event.   Olympic gold medallists James Cracknell and Rebecca Romero will join Paralympic gold medallists Sarah Storey and Jody Cundy to lead 600 cyclists through Wick this weekend as they pedal their way to Lands End.