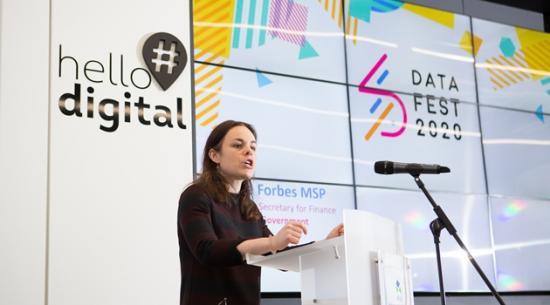 Now in its fourth year, DataFest will once again showcase Scotland's leading role in data science and artificial intelligence.

DataFest20 is run by Scotland's data innovation centre ‘The Data Lab' and hosted by Highlands and Islands Enterprise (HIE) in the region.

Over the next week, the fringe festival of data innovation will take place 9-14 March at HIE's digital demonstration centre, #hellodigital at An Lòchran in Inverness. Events include a discussion on using data to improve the health and wellbeing of people in Scotland, truths and myths about what Silicon Valley is really like, how technology can improve remote and rural healthcare and developing businesses with data.

Other fringe events will take place across Scotland and will include debates, meetups and activities focusing on data innovation.

Datafest20 offers a networking platform where those who take part can interact with local and international talent, industry, academia and data enthusiasts.

Finance Secretary Kate Forbes said:"I am delighted to launch this year's festival in Inverness. DataFest has grown from strength to strength and this year will consist of 80 events with more than 5,500 people expected to get involved.

"Over the next two weeks DataFest will shine a spotlight on the impact data and AI can have on people's lives, with activities taking place across Scotland.

"A lot has already been achieved in realising Scotland's data potential, but it is important that we build on that success and use data innovation to deliver real economic, social and environmental benefits throughout the country."

Sessions in Inverness this week will include workshops on networking, CV and interview skills, a presentation from John Straw from LifeScan Scotland about how automation powered by AI will drastically change business structure and processes.

A hub, which was set-up last year as part of The Data Lab to ensure the Highlands and Islands benefit from growing market opportunities in data science has helped the rural digital economy. In its first 10 months, the Data Lab Hub initiative based at HIE's offices in Inverness has reached over 100 attendees to meet demand in the Highlands for these events and the opportunities they provide.

Theresa Swayne, senior development manager (Digital) at HIE, said:"We are delighted to be launching DataFest20 in Inverness. The opportunities from the data revolution are enormous and we want to ensure that the Highlands and Islands is best placed to exploit them.

"Our relationship with The Data Lab Innovation Centre has evolved rapidly since we launched the regional hub last year. It is exciting to be part of regional engagement on the topic of data and artificial intelligence (AI) through emerging pipeline projects, student activity, consultations and events. Events like DataFest20 are an opportunity to build the data community in the region and HIE is again happy to support fringe events as part of Scotland's festival of data."

Gillian Docherty, CEO of The Data Lab, added:"It's fantastic to have HIE as a key partner for The Data Lab and we look forward to expanding our joint work further to support the community in the region on their digital journey. We are delighted to have the Highlands and Islands Fringe festival back for DataFest20 and I am sure that this week will be an excellent platform for inspiration and collaboration."

An Lòchran is a state-of-the-art multiple occupancy building