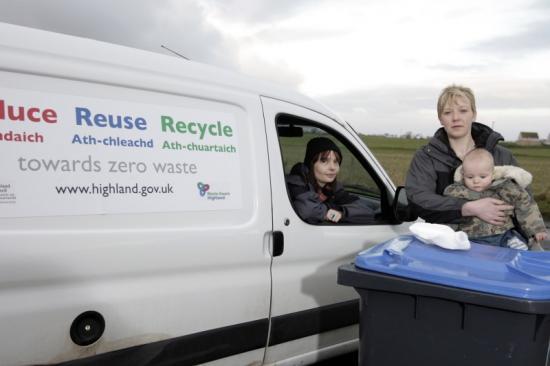 Over 10 tonnes of waste has been diverted from landfill in the first week of the rural recycling collections in Caithness with 60% of residents putting out their bins for collection.

Chairman of TEC Services, Councillor John Laing said: "I would like to thank the public for their high level of commitment to making the new service such a success. Already in the first week over 10 tons of material has been diverted from landfill and will instead be used to make products, thus saving both resources and energy used in converting them. This is all good news for the environment."

Encouragingly, contamination of the bins with the wrong material has been low with glass being the main culprit followed by plastic bags, Tetrapak and plastic other than bottles.

Householders are reminded that collections are only once every four weeks so it is important to check the dates on their calendars to ensure that they do not miss their collection day. They are also reminded that the bins cannot take glass and they should continue to use their local recycling points for this. Tetrapak must also not be put in blue-lidded bin but may be saved up and taken to the Thurso Recycling Centre where a special bin is provided.

All items in the bins should be loose with no plastic bags or any other plastic other than the plastic bottles. Full details of how to use the bins are given in the booklet that was delivered with the bins.

Any resident needing further advice can contact the Council by telephoning on 01955 607171 or visit www.highland.gov.uk/recycle or email - recycle[AT]highland.gov.uk.

PHOTO
The Highland Council's Waste Management Assistant for Caithness, Andrea Wotherspoon is pictured with Kirsty Miller and baby Glen from Tales of Watten as they wait for their blue bin to be emptied by the recycling crew.