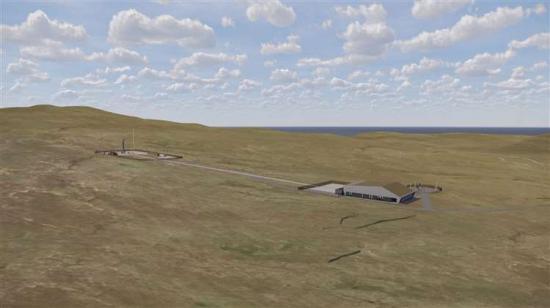 The first orbital spaceflight from the United Kingdom has come a step closer following the Highland Council's decision to give the go-ahead for the Space Hub Sutherland spaceport. Orbex, the UK-based space launch company, has confirmed that Orbex Prime will be the first vertical launch vehicle to fly into orbit from the Space Hub, which will be constructed near Melness on the northern coast of Scotland. Orbex today confirmed the company has already signed six launch contracts.

"The Highland Council's approval of the spaceport is a landmark in the history of spaceflight in Europe and will place the community around Tongue, Melness and Skerray, the Highlands Region, Scotland and the United Kingdom at the very heart of the European space launch industry," said Chris Larmour, CEO of Orbex. "We would like to congratulate Highlands and Islands Enterprise on their leadership of this project and thank numerous local people for their active engagement and support throughout the meticulous planning process. We look forward to becoming an integral part of the local community as we establish our own permanent team at the Space Hub."

The go-ahead for Space Hub Sutherland coincides with a period of intensive work within Orbex: design and development work has continued throughout the pandemic. Orbex's innovative coaxial fuel tank is being subjected to ongoing cryogenic testing, and the company recently signed a lease to install a new testing facility on the former RAF base at Kinloss, close to the company's headquarters in Forres. In parallel Orbex's rocket engines have been progressing through a programme of increasingly demanding performance tests while avionics and guidance systems are also being ground tested.

Several new starters joined the Orbex team in recent weeks, with more expected to join over the summer period. Recruitment is expected to accelerate now that Orbex's preferred option of an easily accessible launch site in Scotland has been approved. Orbex has also partnered with the UK Space Agency's SPIN programme, offering long-term internships to give young engineers hands-on experience of launch vehicle design and production.

The Highland Council's decision will allow Orbex to complete the detailed scoping of its own launch site installation and launch preparation team, which will create full-time, permanent jobs at the Space Hub. Recruitment is expected to start while the spaceport construction is underway.

Conceived and developed as an environmentally sustainable launch system, Orbex Prime will use renewable biofuels to deliver an industry-leading ultra-low CO2 footprint. The Orbex vehicle is intended to be recoverable and re-usable, normally leaving no debris in the ocean or in orbit around the Earth. In January, the European Space Agency awarded Orbex a contract under its Future Launchers Preparatory Program, (FLPP) covering the further development of REFLIGHT, a near zero-mass reusability system which will allow Stage One boosters to be recovered and reused in multiple missions, further reducing the use of raw materials.

"The go-ahead for the Space Hub Sutherland, combined with the steady progress of the Orbex Prime launch vehicle, are important steps towards the first truly orbital space flight from the UK. The last piece of the jigsaw puzzle is the regulatory framework that will govern launches, and we look forward to those regulations being laid before Parliament in the coming weeks," concluded Larmour.

The applicant for planning permission was HIE. See the application details at https://www.highland.gov.uk/meetings/meeting/4271/north_planning_applications_committee

Cairngorm Estate owner, Highlands and Islands Enterprise (HIE), has responded positively to a request from stakeholders to extend the deadline, which was originally to be 31 August.   Deadline extended to 15 September.
[Advisory / Counseling Services]
2/9/2020

Businesses that meet the criteria will be eligible for both grants and a holistic business review with bespoke support based on their individual needs.   Carroll Buxton, deputy chief executive of HIE, said: "Hotels are at the heart of our tourism sector, which is central to our regional economy and a vital source of rural employment.
[Advisory / Counseling Services]
2/9/2020

Reaching new audiences through digital media will be the focus of free online workshops for heritage organisations being held over the next two months.   The first series of virtual events held in May and June proved popular with thousands of viewers during the lockdown.