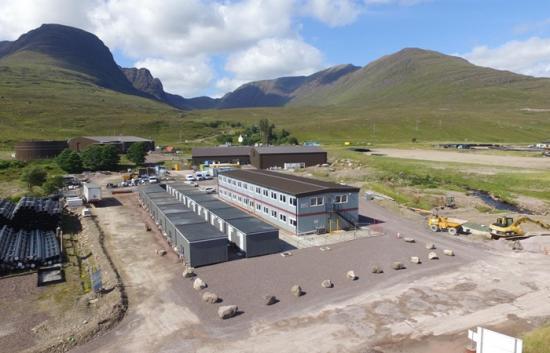 A project to create accommodation facilities at Kishorn dry dock in Wester Ross has secured investment of up to £94,675 from Highlands and Islands Enterprise (HIE).

Having on-site accommodation will enhance the dock's capacity and help it attract more high-end contracts in offshore renewables and oil and gas decommissioning. This in turn will bring wider benefits to the local economy.

Kishorn Port Ltd (KPL) is a joint venture between Leiths (Scotland) Ltd and Ferguson Freight Holdings Ltd, both of whom have businesses at the port. Ferguson Transport and Shipping operate the port and use as a base for their marine logistic services to the aquaculture industry and Leiths operate a quarry on the site.

Kishorn dry dock was developed in the 1970s as a manufacturing and fabrication yard for oil platforms. As one of the largest dry docks in Europe, the facility was also central to the manufacturing of the two Skye Bridge concrete caissons in the 1990s.

Last week it welcomed Teekay's Banff FPSO for temporary mooring and the Dry Dock was also recently used for the dismantling of the Kaami cargo vessel, which ran aground off the coast of Skye in March.

Other projects in recent years include support service on the Ocean Great White rig, prior to it being commissioned to the West of Shetland oil field.

In 2017 the dock was completely refurbished in readiness for new contracts. The abutment gates and seals were overhauled, the site was prepared in readiness and a new access concrete ramp was created. The £450,000 project included £158,932 from HIE.

KPL also secured £800,000, from the Scottish Government's Decommissioning Challenge Fund, for infrastructure upgrades at the dry dock, certified by Bureau Veritas and now open for business.

The accommodation project will involve the installation of two blocks housing 28 single bedrooms.

Alastair Nicolson, HIE's area manager for Lochaber, Skye and Wester Ross, said:"Kishorn Port and Dry Dock is a great asset to Wester Ross that supports valuable jobs in a very rural area. It contributes to economic and community growth and the wider competitiveness of the region.

"The dock has huge potential, not only in the decommissioning of floating structures, but in the extension of life for oil and gas assets, renewables and aquaculture projects as well.

"We are very pleased to be able to support this latest project to develop on site accommodation. This will enhance the site's capacity and help it attract more high-value contracts."

Alasdair Ferguson, Director of Kishorn Port Ltd, said:“HIE's financial support at Kishorn is very much appreciated. This support funding has allowed us to develop on site accommodation to support contractors and staff who are out with reasonable travelling distance to work on site for projects such as the ones we are currently undertaking and also for future contracts."

The online news hound "The Ferret has published a story today that the space hubs being proposed for Sutherland and Shetland will be used to launch spy satellites.   The arms industry is preparing to use two spaceports planned for Scotland to launch military spy satellites, an investigation by The Ferret can reveal.