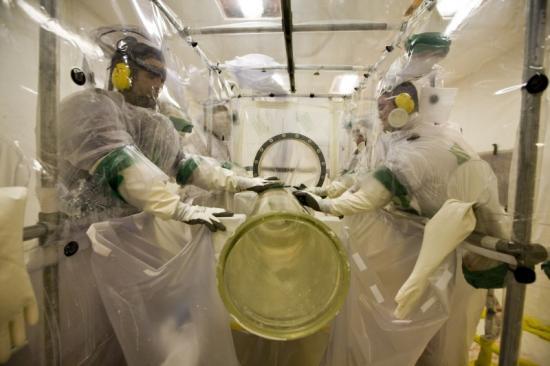 Another legacy of Dounreay's commercial venture into nuclear reprocessing has been safely cleaned up and taken apart. A household proprietry cleaner "Mr Muscle" was found to be the most effective way of removing glue and fake snow use in the clean-up process.

The pulsed column laboratory was part of Dounreay's attempt to create a commercial future in specialised nuclear services. It was built in the early 1980s to carry out realistic testing of commercial size pulsed columns with plutonium solutions.

The pulsed column rig, constructed inside a four-storey glove-box, was a towering array of slim glass tubes up to 10m high. The six columns were constructed from borosilicate glass sections, each 2m long, and weighing approximately 30kg.

The laboratory began operation in January 1986 and was finally shut down in 1991. Phase 1 decommissioning began in December 1991 and continued until March 1993. All the nuclear material, the 6 pulsed columns and other fittings in the glovebox were removed . Thereafter the laboratory was left on 'care and maintenance' until the final phase of the clean up work began in 2004.

Various options were explored for the disposal of the glass columns. Crushing was tried and abandoned due to the potential for the spread of contamination. Eventually, the decommissioning project team found that the best option was to decontaminate the columns and dispose of them as low level waste.

The columns were wrapped in Kevlar, carefully packaged up and transported to the site's decontamination facility.

The team carried out inactive trials wearing full airline suits. They used a clean glass column, and coated the interior with spray-on snow and the exterior with a PVA glue and tie-down coating to mimic the contaminated glass columns.

During the trials, they discovered that a household-strength glass cleaner 'Mr Muscle' was particularly effective in removing the glue and fake snow.

The team began the clean up of the contaminated columns in December 2008.

"We developed ideas that were originally put into practice by the team taking apart the pulsed column glovebox," said Charlie.

Alec added; "There has been a lot of worker participation in the design of the primary decontamination containment. Their suggestions have been very valuable and has helped us to make refinements to the design. "

Following the decontamination process the columns were packed into industrial containers for future grouting, before being stored as low level waste.