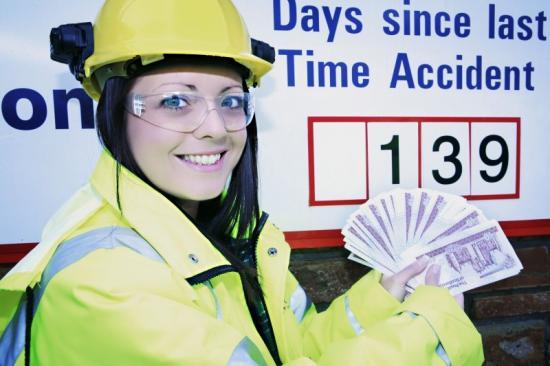 Every month the site goes without a lost-time accident earns a £2500 pay-out from UKAEA Ltd, parent company of Dounreay Site Restoration Ltd.

Each month represents more than 300,000 man-hours of work. The site recorded a total of nine accident-free months during the last financial year, resulting in a payment of £22,500.

The money is donated to the Dounreay Communities Fund, which supports charitable groups in Caithness and north Sutherland. The Nuclear Decommissioning Authority gives £20,000 to the fund. Profits from a book published to mark the site's 50th anniversary are also donated.

Tony Wratten, Dounreay's head of safety, said the pay-out was welcome but it underlined the need to work even harder on its zero-tolerance policy towards safety breaches.

"The best reward for a zero accident rate is the reassurance it brings that no-one is being harmed during decommissioning," he said.

"This phase of the programme involves a lot more construction and demolition work, with its inherent hazards, so it is more important than ever that we root out lapses in concentration or mistakes that can put people at greater risk of an injury."

For more details about Dounreay Communities Fund and how to apply see
www.dounreay.com/social-responsibility/dounreay-communities-fund

Starting Salary: Â£12,595 in Year 1 rising to Â£18,191 in Year 4.   Dounreay is working at the forefront of nuclear decommissioning, waste management and environmental restoration.
[Other Public Services]
3/12/2019

As part of the nuclear sector deal, to foster ever-stronger links between the British and Japanese nuclear industry, Councillor Struan Mackie who represents Thurso and North West Caithness on Highland Council (Deputy-Chair of the Dounreay Stakeholder Group) undertook a five day Japanese visit to discuss the impact of nuclear decommissioning on local communities with stakeholders in Tsuruga City, Fukui prefecture.   The whistle-stop visit included two days in Tsuruga on , the home of the Japanese Atomic Energy Agencies fast reactor â€˜Monju', is generally regarded to be a â€˜partner plant' to Dounreay's PFR in Caithness.
[Other Public Services]
26/10/2019

Seven Dounreay apprentices have received their indenture certificates at a special event to mark the successful conclusion of their 4-year training programme.   The latest group â€˜graduating' joined the company in 2015 - the 60th year apprentices had been part of the workforce at Dounreay and the first time in more than a decade that design office apprentices had been recruited.