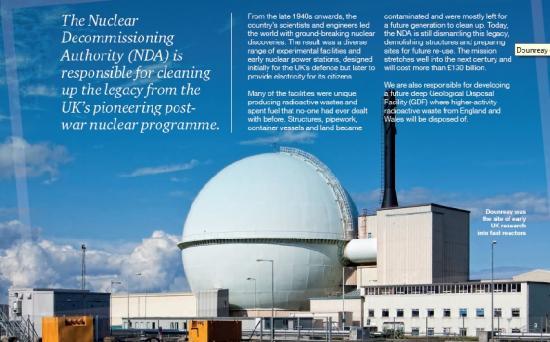 Dounreay features in a new leaflet from the Nuclear Decommissioning Agency showing recent research, development and innovation. See the leaflet link at the bottom of this page to read about some of the other investments by the NDA.

Before the experimental Dounreay Fast Reactor (DFR) can be dismantled, a clear understanding is required of radiation levels, and their distribution, inside the shielded vault that houses the

DFR was the world's first fast breeder reactor to supply electricity to a national grid, playing an important part in research for fuel and coolant technology.

Decommissioning the DFR is one of the UK's most significant nuclear challenges. As workforce access to DFR's interior is

impossible, measurements were taken using a variety of tools deployed through the dozens of openings. Among other

Almost 70 tonnes of highly radioactive and chemically reactive NaK were destroyed over 10 years in a purpose-built plant, and

dealing with remaining contamination is a key challenge.

Four different systems were used to collect data, including the compact N-visage gamma imaging scanner, which was developed by Cumbria-based Createc with support from the NDA's research budget and Innovate UK.

Senior Characterisation Specialist Vittoria Baldioli said: "Work to build a comprehensive picture of the vault's inventory, including radioactive hotspots, has been under way for a number of years.

"It's also important to predict how conditions will change once decommissioning starts and items are retrieved. This will enable us

Data from all techniques provided large quantities of information but did not represent the entire vault. The team opted to use the Monte Carlo N-particle (MCNP) code, a powerful and highly specialised

A 3D MCNP model of DFR's vault was constructed using all available information, and gradually adjusted to achieve a match

The model will support decommissioning, modified when necessary, and used to determine dose rate changes outside the vault, through the effects of shielding, and inside as components are removed.

It will be of particular value for addressing contamination levels, and can also be applied at other decommissioning sites in the NDA group.

The public consultation on the NDA's Draft Strategy 4 closes at 5pm on Sunday 8th November 2020.   Because of the current Government guidance around social distancing during the COVID-19 pandemic, we have created a virtual consultation exhibition to give members of the public a chance to delve into the key themes, before making a response.