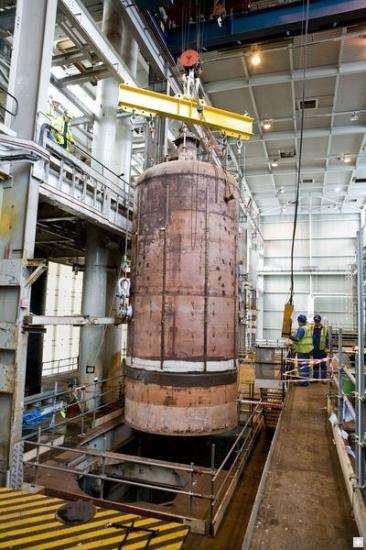 This is the latest challenge Dounreay's Prototype Fast Reactor decommissioning team have had to conquer.

Once an integral part of the heat transfer system, the first of the four colossal metal tanks was safely removed from the redundant plant last week.

In preparation for their removal the four giant cylinders have been isolated and dismantled from their surrounding support structures, de-lagged and the intricate pipework disconnected.

The project decommissioning team set to work on the removal of the first giant nine-metre deep tank, with a weight of approximately twenty-six tonnes.

A crane with a fifty tonne load capacity was used to slowly lift the monster tank out of the reactor steam generation building, where it will remain until the solidified sodium can be dug out by the AMRR Alliance team, comprising DSRL, JGC Engineering, BNS Nuclear Services and Jacobs Ltd.

Three of the tanks formed part of the reactors protection system, where sodium from the secondary circuits could be dumped in case of emergency. Each tank was capable of holding over sixty-seven tonnes, and could be filled in a matter of a few minutes.

The fourth and largest tank, capable of holding 110 tonnes, was part of the system that cleaned and filtered the sodium before it was pumped back into the secondary sodium circuit.

The remaining three tanks will be uplifted in the near future. The tanks contain sodium varying from 250kg to 9 tonnes. Once all approvals are granted, the sodium dig out and tank cleaning will commence in preparation for size reduction and disposal via the approved waste route.