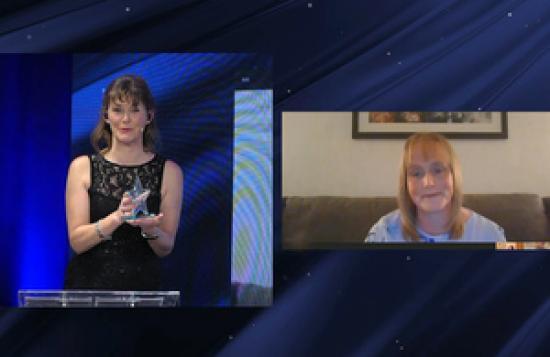 About 100 or so workers normally attend Dounreay's annual showcase event, when staff are recognised for reaching levels of excellence in their work to decommission the plant.

The coronavirus pandemic threw a spanner in the works during 2020 because of legal restrictions about how many people could gather in one place. So, they had to make a choice - take the easy option which would have been to cancel altogether and return again next year or do something new and innovative that would be inclusive and fun.

With most staff working remotely from home, the site's operator moved the December event on-line - and pulled in an audience many times greater than usual.

And thanks to the roll-out of video communications, it also meant they could feature a cabaret showcasing the hidden talents of the Dounreay workforce.

Now, the event has been short-listed in the "best event" category of the Chartered Institute of Public Relations Scotland PRide awards.

"Innovation in the face of adversity enabled us to take the event from a small number of invited guests to something that reached every corner of the workforce and made us all feel really proud of our achievements during a very difficult time," said Gail Ross, head of communications at Dounreay Site Restoration Ltd.

In addition to recognising the outstanding achievements during the previous 12 months of individuals and teams at the site, it also featured a cabaret of staff performing musical interludes and even a magic show.

A poll of staff picked Caithness Mental Health Group as the nominated charity, with more than £4000 raised during the course of the evening.

The winner of the CIPR Scotland PRide award will be announced on 6 October.

From STV on leaks at Dounreay.   Nuclear regulators have chastised the operators of one of Scotland's largest decommissioned facilities over "clear safety breaches" following a chemical leak.
[Advisory / Counseling Services]
17/7/2022

Dounreay 2022 - Brochure about Dounreay including the history

Dounreay 2022 A Colour Brochure about Dounreay including the history has been published.   It has lots of pictures and is an easy read.
[Other Public Services]
26/6/2022