Lifting The Lid On The Dismantling Of Dounreay's Material Test Reactor 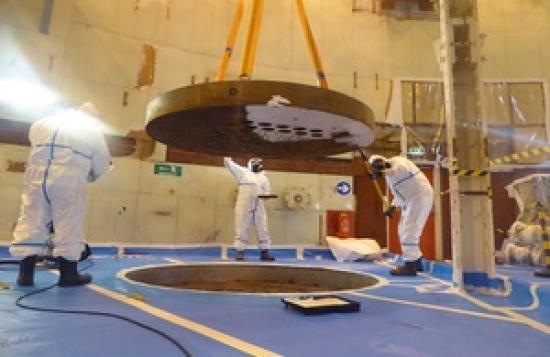 Original internal steelwork is being stripped out of the Dounreay Material Test Reactor (DMTR) as it continues preparations for a major skyline change.

Original internal steelwork is being stripped out of the Dounreay Material Test Reactor (DMTR) as it continues preparations for a major skyline change.

DMTR became Scotland's first operating reactor when it achieved criticality in 1958. It was used for irradiation tests on materials until its shutdown in 1969. In 2018 a contract was awarded to Cavendish Nuclear Limited to dismantle and demolish the reactor. The fuel, heavy-water coolant and some redundant plant have been removed, leaving the reactor vessel, supports and containment shell ready for final demolition.

Work is currently focused on the fuel element storage block (FESB), where irradiated fuel was stored after its removal from the reactor. The 8.9 tonne lid, known as the top plate, mezzanine floor and steel beams surrounding the top of the 5m tall FESB have now all been removed.

DSRL Project Manager, Fiona Forbes, said:When DMTR was constructed in the late 1950s, it was technologically advanced and innovative. Sixty years on, its demolition will be a major milestone for the site. This is the first time that the top plate has been lifted since the early 1970s.

The work is being carried out by a team of up to 50 personnel including local firms, Cavendish and DSRL staff, who are working together to move the project on in a safe and secure way.

Whilst all deconstruction activities are currently inside, demolition of the reactor will be the biggest change to the Dounreay skyline since decommissioning began, and a major strategic achievement.

Using the waste hierarchy, efforts are being made to maximise materials for recycling and identify options for sentencing the metal as low level waste.

The next phase of work, to surround the FESB with an atmosphere-controlled containment structure, is underway and will enable operators to demolish the reinforced concrete block. This is expected to be carried out using a remotely-operated demolition machine in the coming months.

Particles are fragments of irradiated nuclear fuel discharged to sea as a result of historic practices in reprocessing.   Used fuel from the reactors on site and other research reactors in Britain and abroad was recycled in the site's reprocessing facilities.