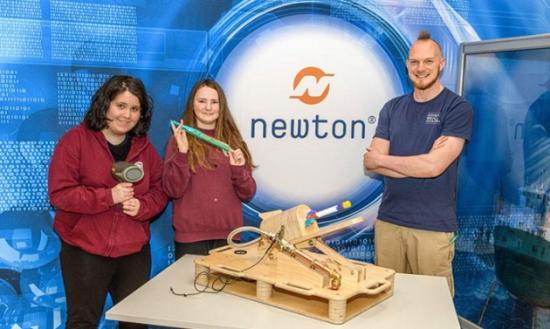 Scotland's space industry is undergoing massive growth, and the Highlands and Islands are at the forefront.

Commercial spaceports that will put satellites into low Earth orbit from Sutherland and Shetland have received planning permission and their development is well underway. Moray-based rocket manufacturer Orbex, which will launch from Space Hub Sutherland, near Tongue, has already created around 60 highly skilled jobs.

When careers in areas such as research, data analysis, the manufacturing supply chain and service industries are factored in, the space sector looks set to create a wide variety of exciting job opportunities in the region, many of which will be filled by people who are currently in school.

Across Scotland, over 100 organisations currently employ around 8,440 people - that's a fifth of the UK total and a rise of almost 740 jobs in the last year. The Scottish Government has predicted that, by 2030, the space sector will be worth £4 billion to the national economy.

That's why the Science Skills Academy (SSA), a pioneering science, technology, engineering and mathematics (STEM) education programme is leading the way with young people in Highland by helping raise their awareness of the sector and building relevant STEM skills.

The Space-themed activity, focusing on launch activity, rockets, satellites and data collection and application, will be delivered across the SSA’s Highland Newton Room Network and is available to all S1 and S2 pupils from the Highland Council region.

Pupils will discover a variety of skills required to work in the sector, ranging from design and engineering, programming, logical thinking, and teamwork. They will learn about Space Hub Sutherland and the rockets that will be launched there, satellites that are designed and built in Scotland, and how the data collected by these satellites is used in real-life applications such as monitoring climate change.

Through practical activities that focus on subjects including physics, material testing and design technology, coding and data handling, they will be introduced to new skills and strengths that are needed for the growing space industry in Scotland.

"By introducing young people to this emerging field and its wide range of career opportunities and pathways, we are highlighting the leading role that the Highlands and Islands have in STEM sectors that are important at local, national and global levels."

Roy Kirk, Highlands and Islands Enterprise project director, Space Hub Sutherland, who met pupils in Kinlochbervie last month (27 April), said, “Our northern location helps make the Highlands and Islands the best place in the UK for launching rockets to put satellites into orbit, and there’s a lot more to the space sector than that.

“As a development agency, our aim is to use the opportunity presented by spaceports in our region to support a very broad range of new jobs that could have a big impact on the economy.

“In North Highland and Moray alone, research commissioned by HIE and Dounreay Site Restoration Ltd showed around 740 jobs could be created by the end of this decade and generate an economic boost of £56m a year.

“When young people are choosing the subjects they want to study, it’s important they know what the careers of tomorrow are likely to look like, and space is a sector with huge potential in a range of exciting topics."

The SSA is a partnership project led by Highlands and Islands Enterprise (HIE) with £3m of Scottish Government funding from the Inverness and Highland City-Region Deal. The project has established the Highland Newton Room Network, consisting of five STEM education facilities across Highland.

As well as the Space module, the SSA has developed other resources including films, available on the SSA YouTube channel, that focus on the Scottish space sector and also career pathways of employees who work in the field.

The first Space module activities were delivered at the end of April to S2 pupils from Culloden Academy at the Inverness Newton Room, and to S1-S3 pupils from Kinlochbervie High School at the Pop-Up Newton Room.

HIE and Scottish Enterprise (SE) teamed up to run the project, aimed at helping companies meet the growing requirement to accurately forecast their environmental impacts.   The two-month pilot recognised that environmental impact is increasingly becoming a deciding factor in a company's overall attractiveness to investors and customers.
[Advisory / Counseling Services]
24/4/2022

The fourteen categories will be open for nominations and entries from 21 April.  Entries can be made online at www.hifoodanddrinkawards.com before the closing date of the 31 May.
[Advisory / Counseling Services]
6/4/2022

Highlands and Islands Enterprise (HIE) and Wildland Limited have signed a memorandum of understanding relating to the development agency's plans to establish a satellite launch site in Sutherland.   Space Hub Sutherland will be sited on the A’ Mhoine peninsula, within the community-owned Melness Crofters Estate and next to land owned by Wildland.
[Advisory / Counseling Services]
31/3/2022

Shellfish and finfish businesses in Shetland are set to benefit from new technology designed to inform optimal and sustainable growth in the aquaculture sector.   UHI Shetland has secured £185,000 investment from HIE to purchase a high-tech piece of equipment known as an Imaging FlowCytobot (IFCB).
[Advisory / Counseling Services]
29/3/2022

Plans to develop a new timber manufacturing and processing facility in Forres, Moray, have secured up to £279,000 Green Jobs Fund investment from Highlands and Islands Enterprise (HIE).   The funding was announced on Friday (25 March 2022) by Minister for Just Transition, Employment and Fair Work, Richard Lochhead, during a visit to family-owned timber processing firm James Jones & Sons (JJS).