On the 17th of May 2012 Thurso High School held a coffee afternoon in the canteen for an hour after school, which was run by first year pupils.

The coffee afternoon revolved around Fairtrade, which aims to ensure a fair amount of money goes to the producers
from developing countries and their communities, so they can have access to schools and healthcare.

The Social Subjects and Home Economics department both had fair-trade associated lessons recently, to co-inside with the coffee afternoon. In History first year pupils studied the shocking history of slavery, in Geography they found out where cocoa was grown to make chocolate, and where the chocolate was sold. In Modern Studies they will be studying child labour. In Home Economics the first year classes baked a delicious array of items, using Fairtrade ingredients, donated to the school by The Cooperative supermarket.

The end result was the highly successful coffee afternoon. A large number of first year volunteers gave up their time to help out, serving refreshments and tidying up afterwards. It was really popular, and was clearly enjoyed by all the friends and family who attended.

The total proceeds of £260.83 will go to a village in Zambia, towards the costs of a well. Mr Simpson, a member of the Rotary club, came to speak to some first year classes before he left to go Zambia. First year donated pencils to give to them, as well as writing letters.

Overall this was a huge success, and will go a long way to people less fortunate than ourselves.

Â Education specialists from across the North-east, North and West of Scotland are to deliver a week-long series of digital professional learning events for teachers and practitioners from the end of September as part of a drive to increase awareness about child poverty in Scotland and the impact this has on learning.   Led by the Northern Alliance (Regional lmprovement Collaborative for the area's eight local authorities) in collaboration with Education Scotland, Promoting Equity Week will run from Monday 28 September.
[Educational Institutions]
14/8/2020

SQA Results In Highland - 5000 increases in grade across all schools

On Tuesday 11 August 2020, Deputy First Minister, John Swinney, announced in the Scottish Parliament a change to the way that SQA results would be decided.   In some cases, the moderation process carried out by the SQA during July and August had meant that candidates might be awarded a lower or higher grade than their teacher had estimated.
[Educational Institutions]
11/8/2020

SQA Results - Downgraded Results Scrapped; Qualifications To Be Based On Teacher Judgement 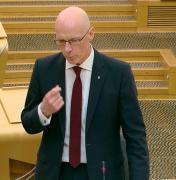 Pupils whose results were downgraded by the SQA are to receive new grades based solely on teacher estimates.   The SQA's alternative certification model was put in place after exams were cancelled due to coronavirus (COVID-19).
[Educational Institutions]
4/8/2020

Guidance for education authorities and teachers published for next academic year.   New guidance will help teachers and councils prepare for the â€˜blended model' of both classroom and home learning when schools re-open in August.
[Educational Institutions]
3/1/2014

Thurso High School, which was damaged on Christmas Eve during a storm, is to reopen to all pupils and staff on Monday 6 January On 24 December a large section of the roof of the 802 pupil school was blown off during high winds.   The school was closed for the Christmas holidays at the time and no one was injured but some damage was reported to private cars in the neighbouring area.
[Educational Institutions]
24/12/2013

A large section of Thurso High School roof has been blown off with the high winds.   Police and Highland Council staff are in attendance and Ormlie Road has been closed.
[Local Authority]
14/11/2013

The Highland Council has appointed Mr Ken Murphy, to the post of Head Teacher of the 804-pupil Thurso High School.   Mr Murphy, who has been the Acting Head Teacher since August of this year, succeeds Dr Fiona Grant, who has reverted to a teaching post at the school.
[Local Authority]
6/11/2013