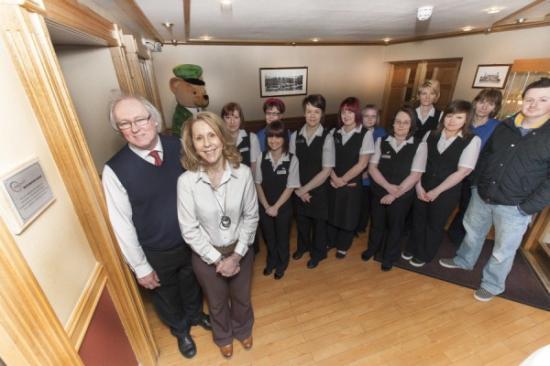 Inspired by the success of the London 2012 Olympics’ Gamesmakers, Mackays Hotel in Wick has become the latest organisation in the UK to gain national recognition for its dedication to excellent customer service, joining an elite segment of hospitality businesses that have achieved the status.

The family run hotel received news this week that it is the first hotel in Caithness & Sutherland to be awarded WorldHost Recognised Business status, a training programme that was used to train the tens of thousands of staff and volunteers for the London 2012 Olympic and Paralympic Games, and nearly one million people worldwide, in exceptional customer service.

WorldHost Recognised Business status is awarded only to businesses that have trained 50% or more of their front line staff using any of the WorldHost training programmes and signed a commitment to delivering excellent customer service.

Inspired by the sheer positivity and commitment to customer service surrounding last year’s Olympic Games, owners Ellie and Murray Lamont looked into the training programme that generated such an impact on a worldwide audience and felt it was something they had to bring to Wick.

Ellie commented:“Customer service is paramount in the hospitality industry. We are here, first and foremost, to serve people and to make their stay enjoyable and memorable. We felt WorldHost training offered a structured and impressive approach to developing our team and bringing a little bit of that exceptional Olympic spirit to Caithness & Sutherland.

I’m delighted we’ve been recognised as a WorldHost business and are one of very few hotels in Scotland to achieve this standard.”

Mackays Hotel in Wick is already world famous for being situated on the Shortest Street in the World, Ebenezer Place and this historical building, dating back to 1883, has been loved and cherished by the same family for over 55 years.

Murray Lamont, owner of Mackays Hotel commented,“This is a real honour to be recognised as a business which can passionately deliver customer service to globally recognised high standards. We take customer service very seriously indeed and will be wearing this accolade with a real sense of Sutherland pride.”

The WorldHost programme is being rolled out across Scotland to help businesses gain a competitive edge and position the nation as a world-class tourist destination.

Health and wellbeing has never been further up the agenda with the introduction of sugar tax, statistics on obesity levels in our future generations and the increasing attention being paid to our metal health.   Caithness is set to play its part in raising awareness and looking at alternative ways to live our lives with the return of a wellbeing festival aimed body, mind and spirit.
[Hotels & Inns]
1/2/2015

The Highland Council lead the charge for resource efficiency in business

Car hire available over the weekends In Wick

Mackays Hotel is delighted to announce in collaboration with Richards Garage car hire vehicles will be available from the hotel outwith normal working hours, including Saturday and Sunday.   Murray Lamont, of Mackays Hotel, commented that he felt there was a gap in the market and particularly on a Sunday when there was no public transport to John O'Groats.
[Hotels & Inns]
25/3/2012

Mackays Hotel asks - 'What are you celebrating?'

Everyone has something to celebrate.  You could have an important birthday coming up, a special anniversary, a graduation or a wedding.
[Hotels & Inns]
1/11/2010