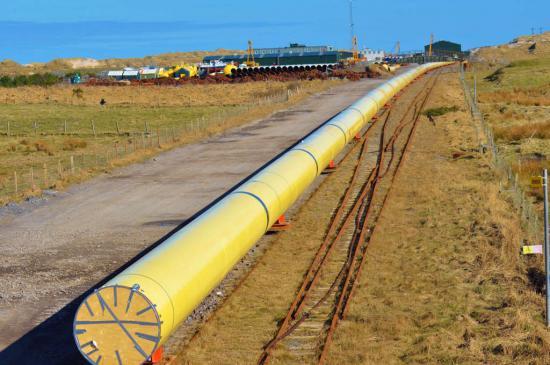 Subsea 7, a global leader in seabed-to-surface engineering, construction and services to the offshore energy industry, is investing over Ł5.5million in refurbishing its pipeline Bundle fabrication site at Wick, Caithness.

Established in 1978, the fabrication site is located six miles north of Wick, Caithness in the North of Scotland. This unique site runs 7.8km inland, covering a total area in excess of 300,000m2 and has a sheltered bay in which to launch the pipeline bundles.

The refurbishment programme is set to be carried out in two phases and includes new state-of-the-art equipment for five firing lines, a 230m extension to the main fabrication shop and a new office and welfare complex at the landward end of the facility. The first phase which began in 2012 is now complete with the second phase of refurbishment scheduled for completion in 2014.

Commenting on the refurbishment programme, Willie Watt, General Manager at the facility, said, “The increasing success of our Bundle technology has been the main driver for this extensive refurbishment programme. Subsea 7 is experiencing its busiest ever period for Bundle design/installation with eight Bundles installed in 2011/12, and a further eight installations confirmed for the period to Q2 2015. The Company’s significant investment in equipment and facilities will support the high activity we are now experiencing as a consequence of embracing the benefits of Bundle technology for rejuvenating and extending existing facilities or new developments.”

There are currently 130 people employed at the fabrication site, a number which can rise to over 150 during a Bundle launch.

To whom it may concern: Subsea 7 will be moving three towheads for the Equinor Snorre Project from Wick Harbour to Wester Site from Monday 2nd December.   It is planned that the towheads will travel along the route through town (as in the photograph below) over three days (one per day) and we hope to complete the operation by Wednesday the 4th of December.
[Engineering & Metal Goods]
1/4/2019

Subsea 7 will be moving three towheads for the Equinor Snorre Project from Wick Harbour to Wester Site in the next 2-3 days.  It is planned that the towheads will travel along the route through town as in the photograph.
[Advisory / Counseling Services]
5/1/2018

Week Commencing 1st January 2018.   Energy & business services: 2018 promises to be another year of exciting change in the energy sector, and to highlight how things have progressed in the north the Beatrice Offshore Windfarm team have produced a short booklet outlining the significant milestones that have been achieved during 2017 - you can access the booklet at https://www.beatricewind.com/single-post/2017/12/22/lookingbackat2017 .
[Engineering & Metal Goods]
22/12/2017

Subsea 7 S.A.  (Oslo BĂ¸rs: SUBC, ADR: SUBCY) has announced the award of a substantial contract by Statoil for the Snorre Expansion Project, located in the Tampen area, 150 km west of FlorĂ¸ in Norway.
[Engineering & Metal Goods]
27/6/2016

Offshore activity is ramping up on Premier Oil's Catcher project in the North Sea, with all three Pipeline Bundles now successfully installed.  Subsea 7's Alasdair Farquharson and Tammie Sebire and Jon Taylor of Premier Oil reflect on the significance of the first Bundle launch in Wick..
[Engineering & Metal Goods]
1/4/2013

Pipe Bundle At Subsea 7 At Wester

A pipeline for Elf Exploration UK Limited in the West Franklin Field is well underway at Subsea 7 site at Wester in Caithness.   A one off pipeline bundle 6.24km long due to be completed in November 2013.
[Engineering & Metal Goods]
4/2/2012

Seabed-to-surface engineering firm Subsea 7 announced its Ł63m contract from BP Exploration Operating Company today, safeguarding 100 jobs at the company.   The deal is part of the second phase of the Clair Ridge Project, 75km west of Shetland, which is undergoing Ł4.5bn investment from BP.
[Engineering & Metal Goods]
30/11/2004