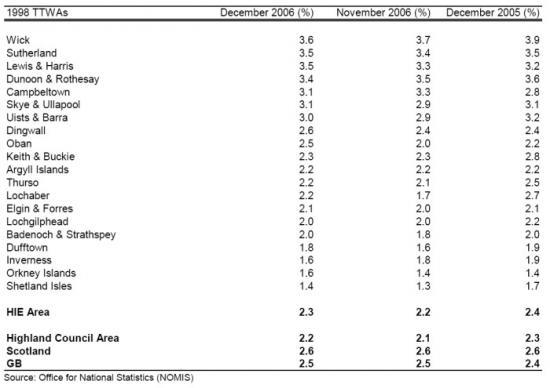 The HIE area witnessed an increase in its unemployment rate during the month, rising 2.8% from 5,717 to 5,878 claimants (161 claimants). This figure is lower than December last year, where the total claimants stood at 6,175, a decrease of 4.8% (297 claimants).
Over the month, November 2006 to December 2006, the claimant count rates rose in 13 TTWA area's, fell in 4, and was static in the remaining 3 - Keith & Buckie, Argyll Islands and Lochgilphead. Oban and Lochaber shared the highest increase over the month, both rising by 0.5%, whilst Campbeltown and Inverness shared the greatest decrease over the month, both falling 0.2%.

Over the year to December 2006, the claimant count rose in 5 TTWAs, fell in 10 and was static in the remaining 5 - Sutherland, Skye & Ullapool, Argyll Islands, Elgin & Forres and Badenoch & Strathspey. Lewis & Harris, Campbeltown and Oban shared the highest increase over the year all rising by 0.3%. Keith & Buckie and Lochaber shared the greatest decrease over the year both falling by 0.5%.