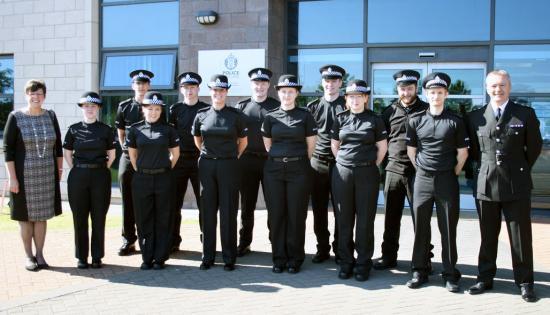 This week saw thirteen new officers enrolled into the ranks of the Special Constabulary within Police Scotland Highland and Islands Division, the first sworn in since the creation of the new police service since April 2013.

The Special Constabulary is a unique body of people who voluntarily give up their personal time to contribute positively to the wellbeing and safety of their communities. Working alongside their regular colleagues, Special Constables undertake a diverse range of Police duties and they frequently face many of the challenges and attain many of the achievements of their full time colleagues.

The new Special Constables, 11 based on the mainland, one in Orkney and one in the Western Isles, were sworn in as part of a series of oath ceremonies conducted across the Highlands and Islands.

The officers have all undergone initial training and successfully passed their initial examinations. As they have now been sworn in, these officers will be deployed to their various stations where they will commit to keeping their communities safe.

This voluntary commitment demonstrates a remarkable personal contribution by each member of the Special Constabulary which is gratefully received and recognised.

For those who are interested in the role of Special Constable further information, including the selection process and how to apply, can be found in the recruitment section of the Police Scotland website - http://www.scotland.police.uk/recruitment/special-constables/