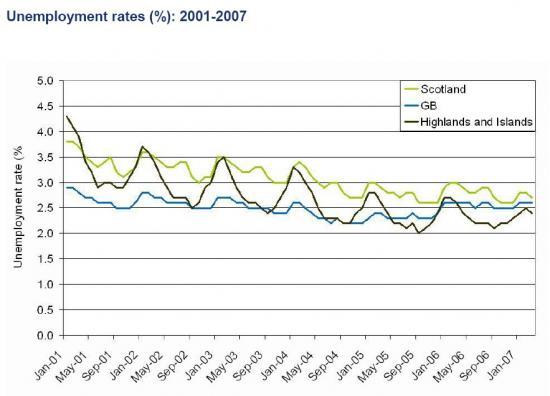 Over the month to March 2007, the number of people claiming unemployment benefit rose in 1 and fell in the remaining 8 LEC areas. Shetland had the only increase over the month, rising 4.2% from 191 to 199 claimants.

Skye and Wester Ross had the greatest decrease of the month falling 9.5% from 389 to 352 claimants.

Long-term Unemployed
the number of long-term unemployed fell in the Caithness and Sutherland area to 250 a drop of 18% between March 06 and March 07.

Information from highlands and Islands Report. the full report can be seen at -
http://www.hie.co.uk/HIE-economic-reports-2007/Unemployment%20Report%20-%20April%202007.pdf