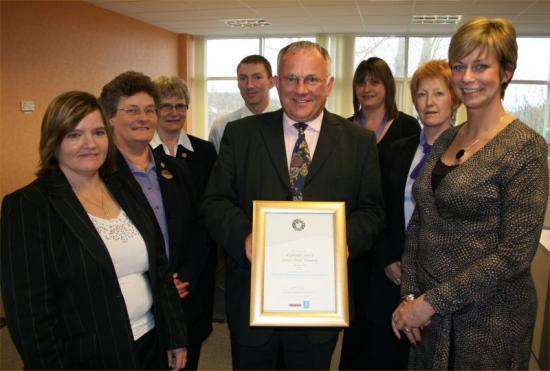 The Highland Council has been awarded the Charter Mark Standard for excellence in customer service delivery for its network of 37 Service Points and its Service Centre at Alness.

After first achieving Charter Mark status in 1999, this is the fifth time that the Cabinet Office has presented the Council with this UK Government award which recognises top quality service delivery.

The Council's Service Centre at Alness handles on average 6,000 to 6,400 telephone calls each week from the public. Last year, 299,188 calls were dealt with and 98% of customers surveyed said they were satisfied with a further 97% saying that they were very or extremely satisfied with the service.

Customers can also get face to face access to a wide range of services five days a week by visiting one of the 37 Service Points in person. Services include payment of rent, council tax and other council bills; arrangement of special refuse collections; application for local authority housing and report repairs and faults; application forms for a range of council benefits, including housing and council tax benefit, free school meals, school clothing grants and travel cards.

During a visit to the Service Centre in Alness, The Highland Council Convener, Councillor Sandy Park took the opportunity to thank frontline staff for the first class service they provide to the public.

Councillor Park said: "Our Service Centre in Alness, and the network of Service Points we have across the Highlands are our front door to the public, a flagship service which puts customer needs and aspirations first. Due to the geographical spread of the Highlands, it is challenging for us to provide services locally but feedback from the public is that they appreciate the service we provide. Everyone within the network deserves tremendous credit for the amount of work that has gone into providing the high level of service which has resulted in Charter Mark success. We are continually monitoring how we are doing and I would like to assure all our customers that we will carry on looking at ways of improving and developing our performance even more."