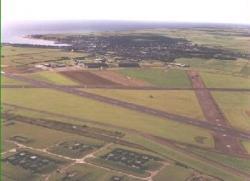 We offer Jet A1 and Avgas 100LL refuelling, including rotors running for rotary wing, aircraft handling, hire and consultancy, including flying training from mainland United Kingdom's most northerly airport.

Amongst the advantages of using Wick Airport is the low density of traffic enjoyed at Wick in comparison to Prestwick, Glasgow and Edinburgh, meaning swifter turnaround times for Trans-Atlantic traffic and their discerning needs.