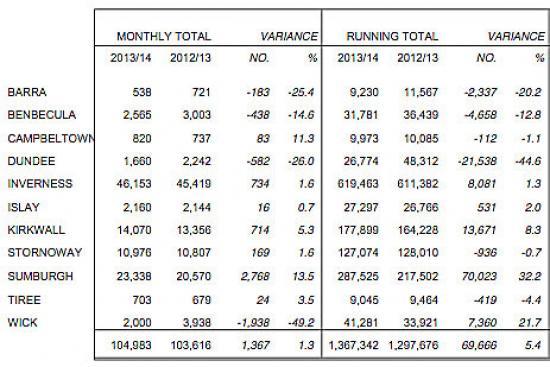 Scottish regional airport operator HIAL has recorded its busiest ever year, attracting an extra 70,000 passengers over the past 12 months, according to latest figures.

Much of the growth was linked to the energy sector, with Sumburgh and Wick John O’Groats the main beneficiaries.
At Sumburgh, Scotland’s fastest growing airport, passenger numbers grew by 32.2% as a result of increased oil and gas traffic. A major terminal development is planned in the coming months to allow for future growth as the airport seeks to expand its energy sector operations.

Wick John O’Groats recorded growth of 21.7% following an increase in energy related fixed wing and helicopter operations, and additional scheduled flights between the capital and the far north.

The Highland capital also enjoyed a passenger bounce, with Inverness airport attracting an extra 8000 passengers during the financial year (+1.3%). Growing demand for key domestic and international hubs, including Manchester, Birmingham and Gatwick and Amsterdam, fuelled the increase. With passenger numbers in excess of 619,000, Inverness enjoyed its busiest year for five years.

However, a number of HIAL’s smaller airports reported a drop in passenger numbers as a result of schedule changes and reduced capacity on key routes.

A reduction in inter-island services resulted in the drop in passenger numbers in Barra, Benbecula and Stornoway airports. Campbeltown and Tiree also recorded a drop in passenger numbers. At Dundee, services to London City were reduced, resulting in lower capacity. However, a new twice daily weekday service to London Stansted was launched last month, offering business and leisure passengers easy access to London and a wider choice of connections from the UK’s fourth busiest airport.

Inglis Lyon, Managing Director of HIAL said, “Last year was our best ever in passenger terms, with the group exceeding the 1.3 million mark for the first time. We owe much of this success to HIAL’s capacity to attract new energy related business, particularly at Wick John O’Groats and Sumburgh. We are confident that both airports can continue to attract new business.

“Kirkwall was another strong performer, attracting an extra 13,000 passengers through the year. Although growth at Inverness was more modest, 2013/14 was its busiest year in five years and we are hopeful that we can secure further growth from Flybe and easyJet at Inverness.

“The picture is less encouraging at some of our smaller airports, such as Barra and Benbecula, where changes to the inter-island schedule have had a significant impact on passenger numbers. These airports nevertheless play a vital social and economic role in the communities they serve and we will continue to seek new opportunities to enhance connectivity to the islands.

“We have worked hard to secure a new London service for Dundee, following the withdrawal of CityJet, and we are working closely with Transport Scotland, Dundee City Council and other partners to secure new business for the airport.”
Meanwhile, HIAL’s airports handled 104,983 passengers last month, up 1.3% on March 2013.