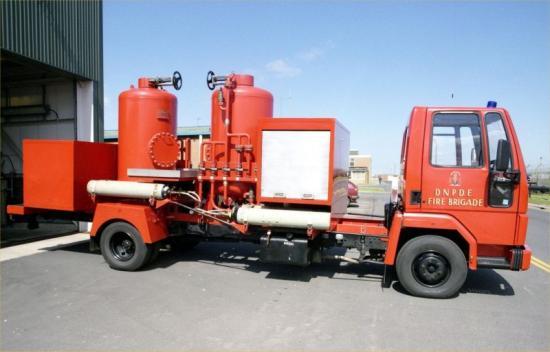 The destruction of the liquid metal coolant in Dounreay's experimental fast reactors means that the site can say farewell to two of its firefighters, the graphex tenders.

Specially built for Dounreay, the two graphex tenders are the only ones in the world. They were designed to fight large scale metal fires, and each vehicle carried one tonne of graphex powder - a graphite-based fire fighting agent - which would be sprayed onto the fire.

The tenders arrived on site in 1984, and have now reached the end of their operational life.

Dounreay's fire chief, Kenny Porteous, comments that the tenders have never been required to put out a metal fire.

"Although the Dounreay Fire Ambulance & Rescue Service has never been called out to fight a large scale metal fire, the tenders have provided us with the reassurance that we could deal with one should it break out," he said.

"However, now that all the sodium has been destroyed in the prototype fast reactor, and the destruction of the coolant at the Dounreay fast reactor is imminent, we no longer need that reassurance and can withdraw these ageing tenders from service."