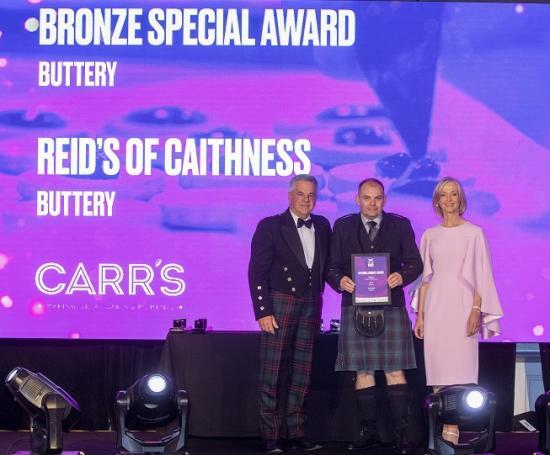 With Scottish Bakers members out in force for their annual conference in Glasgow, the baker was presented their prize by Scottish Bakers' Ambassador Mich Turner MBE. He said, "With nearly 500 products from 57 bakers entered and with each product assessed for appearance, the quality of the bake and taste, Reids of Caithness should be very proud of their success.

The Scottish Baker of the Year competition sets out to select the best scones, loaves, savoury items, morning rolls, individual cakes and biscuits as well as the latest categories French and Danish style pastries and Free-from bread, biscuits and cakes.

"With 50 industry professionals on hand during our annual judging day to put each product through its paces, our winners can be justifiably proud of their achievements," said Alasdair Smith of Scottish Bakers who organise the competition. "We really do congratulate all of our winners and we thank the voting public for taking the time to vote for their favourite bakery business.

The ultimate prize of Scottish Baker of the Year for 2022/23 was awarded to The Three Little Bakers of Inverness.

Scottish Baker of the Year 2022/3 shortlist announced and Reid's of Caithness is in the running Reid’s of Caithness of Thurso has made it to the shortlist of the 10th Scottish Baker of the Year Awards following the annual judging day held in Dunfermline earlier this month.   With Scottish Bakers members each asked to put forward 10 of their star products to be taste tested by some 55 industry experts - nearly 500 products from 57 bakers were delivered for the judges to assess for appearance, the quality of the bake and taste.
[Bakers]
11/6/2019

Thanks to the votes of their customers and following a rigorous day of judging by some 50 of the industry's top professionals, Reids Bakery of Thurso, Caithness has been shortlisted for a prize in the Scottish Baker of the Year 2019/20 competition.   "With over 8000 customer votes and in excess of 30,000 individual products votes, for goods baked by the best bakers in the country, Reids Bakery can be very proud of having made it this far" said Head Judge Robert Ross.
[Bakers]
8/5/2018