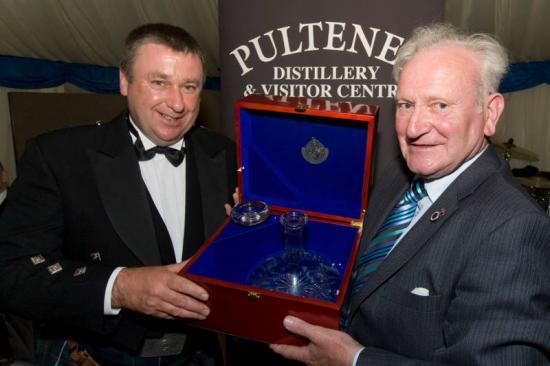 The ball, which took place on Friday, 4th June 2010, commemorates the repeal of Prohibition in Wick and was held for the fourth time after its inauguration in 2007. Hosted in a marquee which was especially erected for the occasion in the distillery's courtyard - the event is the only one of its kind in Scotland.

Over 120 people attended and contributed greatly to the chosen charity through ticket sales and a prize draw. As well as a three course dinner and delicious drams of Old Pulteney, guests enjoyed a hilarious performance by Robbie Glen, Scotland's leading after dinner speaker. Fine dining, dancing, superb prizes and a live performance by local band Doon Major ensured that a great evening was had by all.

A further highlight of the evening was the Old Pulteney Maritime Achievement Award winner announcement for 2010. Judged by Old Pulteney, the RNLI and Wick Harbour, the recognition is given annually to a local resident who has contributed greatly towards the community and the maritime industry.

This year the honour was awarded to Lybster resident George Carter, who has dedicated over 50 years of service to the local maritime industry. George's career began in 1955 where he served as a fishing skipper in and out of Wick for over forty years. In addition to pioneering new technology for local fishing fraternities, George has also been Chairman of both Lybster Harbour Society and Wick's White Fish Producers Association. George is presently the Chairman of the Lybster Branch RNLI and the Caithness Branch Merchant Navy Association.

Malcolm Waring, Pulteney Distillery Manager: "The atmosphere at this year's Ball was fantastic and the guests thoroughly enjoyed themselves with a wee dram or two. Robbie Glen was an excellent after dinner speaker and the band ensured everyone danced the night away. We are delighted to have raised such a great donation for the RNLI and would like to thank all the guests for their generous contributions."

Wick, Whisky And The Herring Boom

A well rounded article about Wick and Whisky has appeared on the Scotch Whisky blog on www.scotchwhisky.com The article is a short history of the connections between whisky, fishing and the town with some period photos.   See it in full at https://scotchwhisky.com/magazine/around-the-world/whisky-travel/17411/wick-whisky-and-the-herring-boom/.
[Food & Drink Products]
20/3/2016

Crowned The Best Single Malt In The World

The extraordinary achievement was announced at Whisky Magazine's prestigious World Whiskies Awards, hosted at the Grand Connaught Rooms in London.   Only the worldâ€™s most exceptional whiskies were nominated, and with a record number of entries this year leading to tough competition, we have even greater cause to celebrate this accolade! We released our peated 1989 Vintage in September 2015 as the embodiment of Pulteney Distilleryâ€™s renowned craftsmanship.
[Food & Drink Products]
2/4/2015

'Angel's Share' of Maritime Malt will help Seafarers in Need.   Old Pulteney Single Malt Scotch Whisky has announced a new partnership to raise vital funds for the global maritime charity The Mission to Seafarers, the organisation that cares for the world's 1.5 million men and women who face danger each day while working at sea.
[Food & Drink Products]
23/10/2012

A Malt Is Born In Wick

Rural Affairs Secretary Richard Lochhead saw a little bit of history being made during a recent visit to Wick's Pulteney Distillery.   A 40 year old single malt has been launched by the distillery - the oldest whisky the company has ever released.
[Food & Drink Products]
30/5/2011

Old Pulteney Single Malt Scotch whisky is delighted to announce that its annual charity event, The Old Pulteney Prohibition Ball, raised over Ł4,600 for the local RNLI Station in Wick, Caithness.   The ball, which took place on Friday, 27th May 2011, commemorates the repeal of Prohibition in Wick and was held for the fifth time after its inauguration in 2007.
[Food & Drink Products]
29/1/2010

Old Pulteney single malt whisky has helped a separated Cape Wrath couple celebrate their reunion this week with a bottle of their whisky from their Wick-based distillery.   John and Kay Ure, who run an isolated tea room in the UK mainland's most north-westerly tip, were forced to spend the festive season apart for the first time in 35 years when the 'big freeze' hit in December.
[Food & Drink Products]
3/6/2008

Old Pulteney Single Malt Whisky is delighted to announce details of this year's charity ball, which will take place on Friday 30 May at Pulteney Distillery in Wick - the ball, which is held to mark the anniversary of the repeal of prohibition in Wick, is the second to take place since the prestigious annual event kicked off last year.   Tickets are on sale now and demand is expected to be high.
[Food & Drink Products]
29/4/2007

Inver House Distillers and North Highland Products launched the first ever North Highland Blended Malt Scotch Whisky, Barrogill, as part of the prestigious Mey Selections range of food and drink products, at the Castle of Mey in Caithness today.   Mey Selections Barrogill Blended Malt Scotch Whisky takes its name from the history and heritage of the Castle of Mey, the most northerly castle on the Scottish mainland just a few miles from John o'Groats.
[Food & Drink Products]
19/7/2006

Old Pulteney Single Malt Whisky is delighted to once again support the famous Mey Games which will take place on 5 August at the Castle of Mey - a mere 20 miles from the distillery and Old Pulteney Visitor Centre in Wick.   During the Games, Old Pulteney will be providing whisky prizes for several key events and supplying some of its delicious 21 year old single malt for guests to enjoy in the VIP tent.