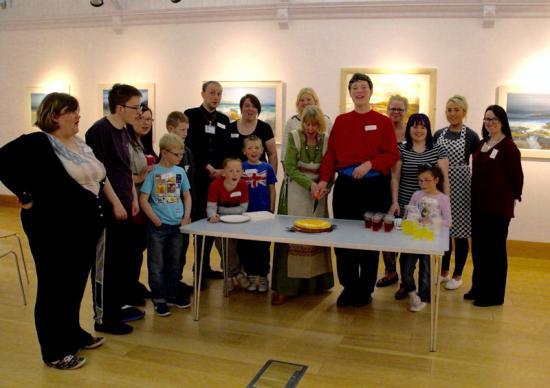 Tuesday 11th August saw local group No Limits Caithness visit the Museum for a morning packed with Viking activities with Curator Joanne Howdle, or Thordis Eiríksdóttir as she is fondly known to local groups and schools. The group helped the Museum to hit the half million visitors mark and to celebrate they were presented with a special cake made in the Museum's cafe.

The 2015 summer season has been excellent for the Museum, welcoming visitors from all over the world to experience all that Caithness has to offer. A passenger from the Saga Pearl 2 cruise ship who visited Caithness Horizons last weekend remarked that it was the best Museum that she had visited.

As well as welcoming holiday makers, the Museum has run some successful workshops over the school holidays with Neil Redgate from the Society of Biology and local artist Hazel Cashmore. The Hazel Cashmore exhibition is on display in the Gallery until 30th August.

On Saturday 15th August the Museum is celebrating local talent with a Craft Market and is expecting a busy weekend with the arrival of the Adonia cruise ship.

Caithness Horizons would like to thank all of its visitors for their continued support over the last six years and we look forward to reaching many more milestones.

The re-launch of the former Caithness Horizons centre in Thurso is set to take place on Tuesday, 2 November 2021, with the facility being rebranded as the North Coast Visitor Centre.   Its relaunch will bring back into use a valuable community asset and support the wider community and economic benefit for Thurso and the wider Caithness Area.
[Visitor Attractions]
28/2/2019

Talks have taken place on the possibility of reopening Thurso's Caithness Horizons which closed last week due to financial problems.   The operators of the museum and art gallery said increasing running costs and reduced income had made the running of the site "unsustainable".
[Visitor Attractions]
24/1/2018

Thursday 10 September, 12.45 -16.30 Caithness Horizons, Thurso (Please note that lunch is not provided, however you are welcome to have lunch at The Caithness Horizons Cafe prior to the event) Running a craft practice is addictive - there is always more to try, new ideas to explore and projects to develop.  Growing your business allows you to confidently pursue these exciting new opportunities to strengthen your profile, expand your range of customers and generate healthy profits.
[Other Professional Services]
7/7/2015