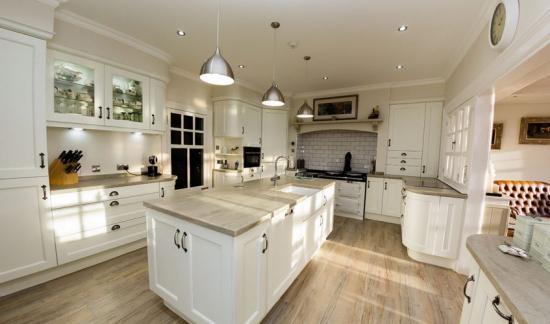 The biggest private sector employer in Wick in Caithness is to strengthen its presence in the area and create more jobs.

Family run Ashley Ann Limited (AAL), which designs and manufactures kitchens, bedrooms and bathrooms, has secured a funding package of up to £190,000 from Highlands and Islands Enterprise (HIE).

The investment forms part of the company's £1.5m investment programme for the next three years.

The HIE money will enable the company to expand by purchasing the building from which it operates, the former Caithness Glass building, and installing new equipment.

More than two thirds of the company's 180-strong workforce is based in Wick. The remainder work in showrooms around the country.

The increased capacity and growing demand for AAL products and services is expected to create around 40 new jobs within three years, nearly half of which will be in Wick.

AAL was formed in 1986 by Stephen and Ellen Bremner, initially operating from a small workshop in Thurso. In 2007 it moved to larger premises in Wick, previously occupied by Grampian Records, before leasing additional warehouse space in the nearby former Caithness Glass building.

The business developed a reputation for design and manufacture of a range of bespoke kitchen units as well as bathroom and bedroom furniture. It has continued to expand in line with a growing reputation and increasing demand, with turnover increasing by 54% in the past three years.

The purchase of the building will provide Ashley Ann Ltd with space to increase production within their existing factory with an estimated corresponding increase in turnover of £3.75m. It will also provide security of tenure in the longer term.

HIE has worked with the company throughout most of its history, providing advice and support on plans for growth. Confirming the HIE investment, business growth account manager Hilary Budge, said:"Ashley Ann Ltd has been a major employer in Caithness for nearly 30 years and has grown steadily over the years.

"The strengthening of the company will provide valuable security for existing employees as well as creating new jobs. This in turn will boost the local economy and strengthen community resilience in Wick.

"I am pleased we are able to support this venture and look forward to continuing to work with the company as it implements its growth plans."

Stephen Bremner, chairman of Ashley Ann Limited, added: "The purchase of the former Caithness Glass building provides an excellent platform for us to take business forward over the next few years. We are delighted with the support we have received from HIE, both on this occasion and in the past. This has helped maintain steady growth of the company over many years to become a significant employer in Caithness and elsewhere."

Ashley Ann business has grown substantially over the last 30 years and shows no signs of slowing down even in the pandemic.   Manufacturing goes on with the housing market being very buoyant and demand for kitchens bathrooms and bedrooms part of it.
[Furniture & Wood]
30/1/2020

A Caithness company is planning to invest more than £2m in its Wick plant, in a move that could see up to 40 new jobs created in the town over the next five years.   Family-run Ashley Ann Ltd (AAL) designs and manufactures kitchens, bedrooms and bathrooms.
[Furniture & Wood]
24/8/2015

Highlands and Islands (Scottish Labour) MSP, David Stewart has congratulated Caithness kitchen manufacturer Ashley Ann following its announced expansion plans over the next two years, lodging a motion in the Scottish Parliament.   The Caithness based firm, which has its manufacturing site in Wick, which alone employees over 100 people, has announced major plans to expand the site over the next two years with over £1million being invested in the factory.
[Furniture & Wood]
8/1/2007

Britain is a nation of hoarders.  The average person accumulates more than a TON of unwanted stuff - crammed in attics, wardrobes and under beds, according to new research.