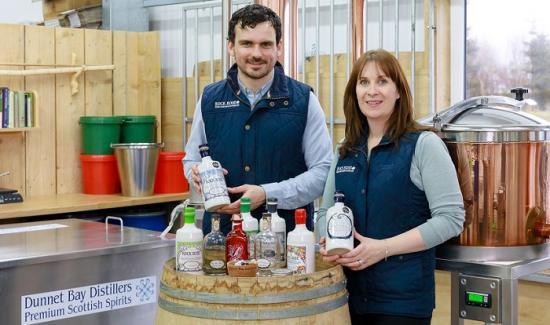 The launch is the latest in a series of exciting developments for the craft distillery, which has significantly expanded to keep up with growing demand. This year alone, following a £300,000 investment, it has not only added a second 500 still but also opened a new visitor centre complete with a tasting room and shop and more than doubled its staff numbers.

Rock Rose Gin is the company's multi award-winning, signature spirit, named after its hero botanical, Rhodiola rosea. It features a carefully curated collection of local and traditional botanicals, also including Juniper Berries, Rowan Berries and Sea Buckthorn, resulting in a taste profile that is flavourful and fresh, zesty but berryful. Since it first launched to market in August 2014 it has amassed a thriving and loyal fan base, with sales growing over 50% in 2017 alone.

Martin Murray, Co-Founder, Dunnet Bay Distillers, says, "The launch into Sainsbury's stores is a significant step for the business, signalling our intent to become a leading brand in the premium gin category. We've been blown away by the demand for Rock Rose Gin since we launched and it will be a proud moment to see our wee taste of the Scottish Highlands hit Sainsbury’s shelves. With our new production facilities we are now in a great position to continue building on this momentum and growing our listings both in the UK and abroad."

Rock Rose Gin launches into Sainsbury’s this July, £35. Across the UK, Rock Rose Gin is available in over 1000 retailers and bars including Fortnum & Mason, Harvey Nichols and Gleneagles. Its growing list of export markets now also includes Malaysia, Singapore and Austria.

Martin and Claire founders of the company.

AWARDED THE HIGHEST ACCOLADE FROM VISIT SCOTLAND.   Dunnet Bay Distillery, the UK's most northerly mainland is distillery, has secured a highly sought-after five star rating from Visit Scotland, recognising it as one of the country's top tourist attractions.
[Food & Drink Products]
22/6/2018

Unique Caithness collaboration will delight both archaeology and gin enthusiasts.   Archaeology and craft gin may seem like worlds apart, but two entrepreneurial companies from the far north of Scotland have teamed up to create a special craft gin, inspired by the prehistoric landscape of Caithness.