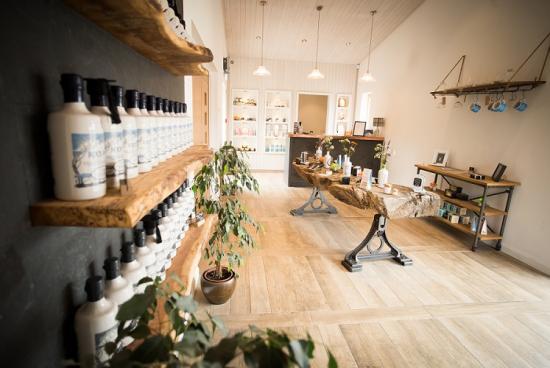 Dunnet Bay Distillery, the UK's most northerly mainland is distillery, has secured a highly sought-after five star rating from Visit Scotland, recognising it as one of the country's top tourist attractions. The distillery, which is located in Caithness and on the North Coast 500 route, picked up the accolade for the regular tours it hosts for visitors, which include tutored tastings of its multi award-winning spirits.

Run by husband and wife team, Martin and Claire Murray, the distillery is most famous for producing the acclaimed Rock Rose Gin and Holy Grass Vodka. Created to express a true taste of the Scottish Highlands, both spirits feature local, hand-foraged botanicals sourced from the nearly cliffs and forest, along with those grown in the distillery's very own botanical garden. A true craft distillery, both spirits are carefully and slowly hand-distilled in traditional copper pots, before being individually wax sealed and signed.

To meet growing visitor demand, the one-hour tours now run twice a day, every day, Monday to Saturday. Proceedings kick off with a Rock Rose Gin and Tonic on their comfy couches by the fire, before guests are taken over to the distillery to meet their two traditional copper pot stills; Margaret and Elizabeth. Here they are taught about the stills and bottling equipment before they head to the Tasting Room for a tutored tasting of the spirits.

The new Five Star rating follows a significant £300,000 investment in the distillery to increase capacity and open the new visitors centre, which boasts the brand new Tasting Room.

Claire Murray, Co-Founder, Dunnet Bay Distillers, says, "We feel so honoured to have achieved the full five star rating from Visit Scotland, which recognises the exceptional level of customer service visitors to our wee distillery can expect. Martin and I are both so passionate about the Scottish Highlands and our beautiful hometown of Caithness, so it’s fantastic to think we are encouraging more people to visit, explore the area and of course enjoy a delicious G&T too!"

Dunnet Bay Distillery tours cost £12, open Monday - Saturday, 11am and 2pm until 31st October 2018. During November and December, tours will run on Saturday’s only.