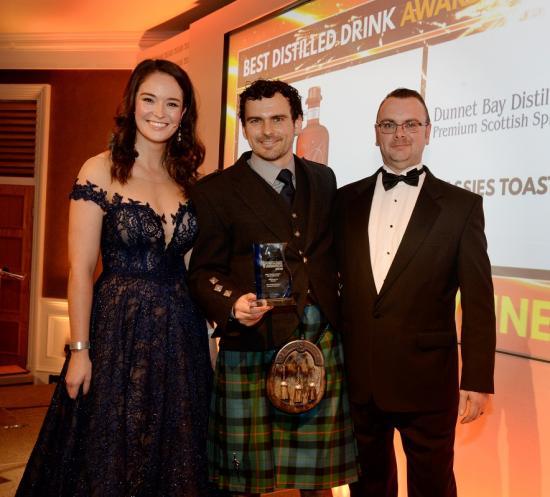 Dunnet Bay Distillers from Caithness are celebrating after being named winner of the Best Distilled Drink category at the Highlands & Islands Food & Drink Awards.

The Highlands & Islands Food & Drink Awards celebrate passion, quality and innovation across the region. They highlight the finest businesses that are helping put the Highlands and Islands on the food and drink map.

Dunnet Bay Distillers won the award for their limited edition "The Lassies Toast" gin, which they released to celebrate Burns Night on 25th January 2018. The gin was inspired by the Moorland tea that Robert Burns is reputed to have enjoyed and was a unique recipe designed in-house and featuring bilberry leaves, strawberry leaves, heather tops, speedwell and wild thyme, all ingredients found in the Moorland tea recipe.

A total of fourteen businesses from the Highlands and Islands were named victorious at the awards. The awards dinner and ceremony took place at the four-star Kingsmills Hotel in Inverness and was hosted by STV presenter, Jennifer Reoch.

Martin Murray, Co-Founder of Dunnet Bay Distillers, winner of said: "We are proud to be recognised once more by the Highlands & Islands Food & Drink Awards. Our Lassies Toast gin was a sell-out success this year, with a record 2000 clicks per minute to buy it at launch, so it will be back by popular demand next year!"

The Highlands & Islands Food & Drink Awards are delivered with support from Highlands and Islands Enterprise (HIE). Elaine Jamieson, Head of Food and Drink at HIE said:

"Entries to the awards were significantly higher in 2018 than in previous years, and categories were very competitive.  It is very encouraging to ksee the diversity and quality of products coming from the Highlands and Islands. It is the overwhelming passion that the people from our region have for producing and providing great food and drink that is putting the Highlands and Islands at the top of the country's food and drink industry."

She went on to say:“The winners should be very proud to have outshined their competition and I hope these well-deserved and independently judged awards will be a distinguishing asset to their businesses.”

The Highlands & Islands Food & Drink Awards launched in 2005 and have since rewarded and supported some of the region's most celebrated food and drink businesses. The Highlands and Islands make up a large portion of Scotland's overall food and drink exports which reached the all-time high of £1billion earlier this year.