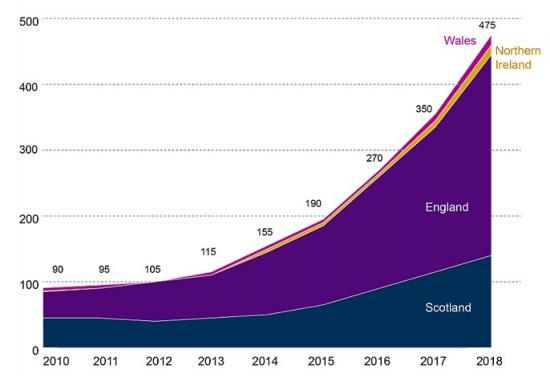 Author of the report - Alison O'Connor.

Scotland's brewing and distilling sectors play a vital role in the Scottish economy. Many distillers and brewers are based in rural communities. This is not only important for direct jobs but also indirectly through generation of tourism, linkages to agriculture, and wider supply chain impacts. Many firms in both sectors are at the forefront of product innovation to cater for ever changing consumer trends. Food and drink is an integral component of how "brand Scotland" is promoted globally. Exported brewery and distillery products help to sell Scotland to the world.

Globally, alcoholic drinks volume sales have been declining and are expected to stagnate further over coming years. Continued growth in spirits, benefited by the cocktail culture, is counterbalanced by decline in ready-to-drink premixes and stagnation in beer, cider/perry and wine. The healthy lifestyle trend has also impacted on alcohol sales manifesting itself in several ways, including increased use of natural botanicals as gin ingredients, growth in natural wines, increased use of fruit flavours in cider, and an increase in low/no-alcohol beers, wines and spirits.

The UK's distilling sector is going through an unprecedented boom. The majority of growth in distilling enterprises has been in England, driven by gin production, which has surpassed Scotland in terms of UK share of distilleries since 2010. Though in terms of revenue share and employment size-band, Scotland is still dominant. It shouldn't be surprising that Scotland is leading the way as it is the whisky capital of the world with hundreds of years of distillery expertise. Here are some key points about Scotland's distilling business base.

Given that some of the large Scottish distilling enterprises produce numerous brands of spirits at different sites, the distinction between enterprises and local units becomes important. In 2018, Scotland had 245 distilling related business local units. This figure represents growth of 69% in the business base since 2010. Much of this growth has been over the last two years. The two years to 2018 alone saw an additional 55 local units recorded.

Average turnover across all Scottish distilleries was approximately £5.3 million in 2018, compared to average turnover of £673,000 for all businesses in the Scottish economy.

Nine in ten distilling jobs in Britain are based in Scotland. Employment levels in the industry have been relatively stable, varying between 7,000 to 8,000 over the last eight years.

The spirits industry contributes approximately 3% to total Scottish GDP. In the 18 years of available data, the contribution of the sector to GDP has averaged 2.8% and peaked at 3.3% of total GDP in 2013. GVA at basic prices for Scotland's 'spirits and wines' industry was £3.9 billion in 2015. This was down from a record high of £4 billion in 2013. The two most recent years of available data (2014-15) show an emerging downward trend.

Spirit duty is a tax on producing and selling spirits, with rates set by the UK Government. The current rate per litre of pure alcohol is £28.74. In real terms the level of excise duty on spirits has fallen by 50% since 1978/9. Commentators argue that there is a strong case for reform of alcohol duties as the current system is not well targeted at heavy drinkers and has indefensible anomalies.

There are over 110 Scottish gins, and over 60 distilleries currently producing gin within Scotland. Three of the world's bestselling gins: Hendrick's, Gordon's and Tanqueray, are all made in Scotland. The way gin has interjected in the homeland of whisky should not be surprising. Increasingly Scotland whisky distillers are looking to gin because it's quicker and easier to make, and gives them a faster return when waiting for whisky to mature. It is estimated that some 70-80% of UK produced gin comes from Scotland. Gin's popularity has seen an onslaught of new 'Scottish' brands hit the market. This has resulted in concerns from industry experts about what is truly a Scottish gin.

Scotland is home to 128 malt and grain distilleries, making it the greatest concentration of whisky producers in the world. While many countries in the world produce whisky, only Scotland can make ‘Scotch'. The majority of scotch whisky is consumed as blended scotch whisky. In 2017, the value of scotch whisky exports reached a record £4.37 billion. To put this into perspective, total expenditure by international visitors to Scotland in 2017 was £2.3 billion. Scotland's national drink accounts for 20% of all UK food and drink exports.

Globally, beer consumption has been falling for decades. However, this has not dampened the significant brewery start-up rate, responding to consumers choosing to drink more expensive, specialised beers. Scotland's craft breweries have flourished over recent years with a plethora of new breweries entering the market.

Back in 1840, Scotland boasted 280 breweries. However, by 1910 this had been reduced to 92 and a continuous decline eventually reduced that number to just 11 by 1970. Now with 115 breweries the industry has increased massively from the 1970s. Year-on-year over the period 2010 to 2018, the number of breweries has increased. This rapid period of expansion has resulted in the beer manufacturing business base increasing by 229% over the eight year period.

Employment in Scotland's brewing sector has averaged 1,000 over the last 9 years, and was at 1,000 in the most recently available data for 2017. This represented 7% of total British employment in the sector.

GVA at basic prices for Scotland's 'manufacture of beers and malts' industry was £334 million in 2015. The period 1998 to 2011 witnessed a trend of decline in the economic value the sector. The last four years of available data (2012-15) have seen a signifiant reversal of this downward trend. Since 2011 the economic value of the sector has increased by 146%. Despite this significant growth, the brewing industry contributes a relatively small proportion of total GDP, at approximately 0.3% of total Scottish GDP.

The brewing sector is an important driver of wider economic activity due to intrinsic links with other sectors. Based on Scottish Government's Input Output modelling, the 'beer and malt' sector is in the top quartile for knock-on economic impacts. It has the 17th highest output multiplier (capturing direct, indirect, and induced effects) of 98 industry groups. This is substantially above the 'spirits' sector which ranks 85th. Both sectors have relatively high employment multiplier effects, with the spirits sector ranked 8th and brewing ranked 10th, across all sectors of the economy.

Important links to other sectors

The supply chains for distilling and brewing encompass much more than the direct on-site production but also upstream provision of farming inputs and downstream inputs such as bottling, package design, marketing, transport logistics, etc. In addition to these core inputs, firms in other sectors - such as construction, energy and financial services - also support the supply chain.

Barley in many ways is Scotland's foremost crop and as a key ingredient in whisky and brewing, it underpins a world-wide, multi-billion pound industry. In 2017, 291,000 hectares of barley (67% of all cereals grown) and 109,000 hectares of wheat (25% of cereals) were grown in Scotland. There were also 33,000 hectares of oats (8% of total cereals). According to the NFUS 28% of the UK's barley area is in Scotland.

The growth in Scotland's distilling and brewing business base is bringing spin-off benefits to the tourism sector with record numbers exploring Scotland's whisky trails and brewery tours. This increased demand for food and drink related experiences has seen an increase in events such as whisky and craft beer festivals, whisky month, gin maps of Scotland, etc. Furthermore an increasing number of bars, pubs and restaurants are offering tasting flights showcasing Scottish gin, whisky and craft beers; and offering tasting menus matching specific beverages to food.

For more details and graphs etc go to -

KICKING OF WITH THE CLOOTIE DUMPLING GIN.   The UK's most northerly mainland distillery, Dunnet Bay Distillers, has announced the launch of a new Creative Collection Series.
[Food & Drink Products]
10/10/2018