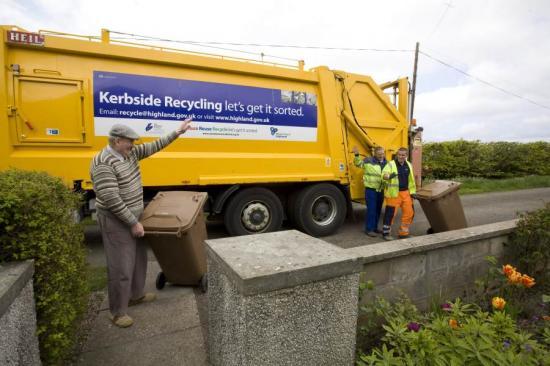 People in Caithness are benefiting from further expansion of The Highland Council's kerbside recycling collection service for paper, cans and garden waste.

Mr William Nicolson from Battery Road in Castletown is one of 500 households benefiting from the roll out of the scheme, bringing the total number of households in Caithness to 8,000 and around 70,000 in total throughout Highland.

Chairman of TEC Services, Councillor John Laing said: "It's great to see further expansion of the kerbside recycling scheme throughout Caithness. People want to recycle, and they are supportive of the opportunities to do so."

The introduction of the Kerbsider is one element of The Highland Council's strategy to fulfil the targets of the Highland Area Waste Plan. The Highland Area Waste Plan is a joint commitment with partner organisations which have been combined into the National Waste Plan. The aims of the National Plan are to minimise the impact of waste on the environment, locally and globally, to improve resources, use efficiency and to remedy environmental injustices suffered by those who had to live with the consequences of a wasteful society.

The blue recycling box should be used for food tins, drink cans, newspapers, magazines, telephone directories, unwanted mail, catalogues, office type paper and greetings card, but not for cardboard and envelopes. The brown wheeled bin should be used for garden waste such as grass clippings, leaves, weeds, hedge clippings, small branches flowers and plants. Plastic bags, stone and soil should not be placed into the brown bins.

For items which cannot be put into the kerbside collection, people can also use the Thurso Recycling Centre at Janetstown. The site is open seven days a week from 11.00am - 5.00pm. Materials accepted at Thurso Recycling Centre include: cans, car batteries, cardboard, engine oil, garden waste, gas cylinders, glass, paper, rubble and soil, scrap metal, textiles, white goods and wood. Furniture and household goods can be donated to Homeaid Caithness for reuse by using the separate containers provided at the site.

More information about recycling in the Caithness area can be found by visiting www.highland.gov.uk or emailing recycle[AT]highland.gov.uk