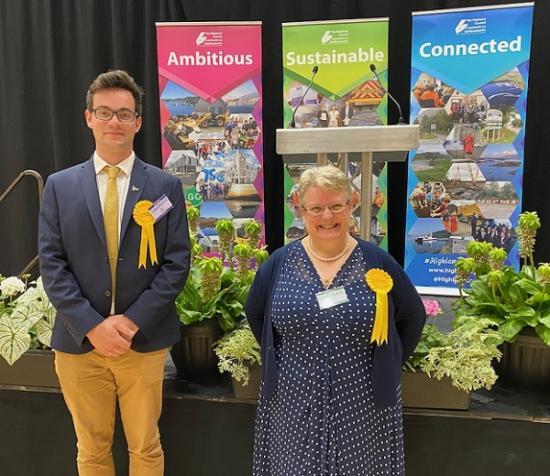 The results of The Highland Council by-elections to elect a councillor to represent the Wick and East Caithness ward and a councillor for the Inverness West Ward have been declared.

Jill Tilt has been elected to represent Ward 3 - Wick and East Caithness. Voting was by the single transferable vote and Jill emerged as the winner at the 5th stage of the count.

Colin Aitken, Scottish Liberal Democrats has been elected to represent Ward 13 - Inverness West, emerging as the winner at the 7th stage of the count.

The detailed by-election results will be published on Monday 16 August on the Council's website - https://www.highland.gov.uk/byelection

The political make-up of the Council is now as follows:

Members of the public are being invited to comment on a Draft Gambling Policy Statement for the coming years 2022-25.   The Highland Council is consulting on the draft policy statement on behalf of The Highland Licensing Board under the Gambling Act 2005.
[Local Authority]
13/9/2021

At the meeting of The Highland Council Members supported a starred item put forward by Caithness Members.   The Thurso and North West Caithness and the Wick and East Caithness Ward Councillors asked that the Council creates and implements a Council wide playground strategy that considers the needs and expectations of communities and supports the active play, well-being and social activity of children and their families.
[Local Authority]
9/9/2021

Members at a meeting on 9 September 2021 of the Highland Council agreed the scope, budget, phasing and timescale for 5 priority school projects including Beauly Primary, Culloden Academy, Dunvegan Primary, Park Primary, and St Clements School.  It was also agreed that these projects are to be incorporated into the Council's current capital programme.
[Local Authority]
10/9/2021

Given the importance of tourism to the Highland economy and the need for the tourism experience to be positive for visitors and communities, members have agreed to extend the Visitor Management Plan funding into the 2022 season by a one-off investment of £1.5m.   A one-off Visitor Management Plan investment of £2.4m agreed by the Council in March 2021 for this year's season has enabled a range of service improvements.
[Local Authority]
9/9/2021

Spirit Of The Highlands - Photography And Filming Tenders Advertised

On behalf of The Highland Council, High Life Highland has this week advertised a tender and invitation to quote seeking creative filming and photography input to the Inverness Castle - Spirit of the Highlands project.   The tender and invitation to quote will contribute to Spirit:Journeys, a natural and cultural heritage initiative that will deliver many benefits for local communities, helping to unlock economic potential and improve visitor experiences across the region.
[Local Authority]
3/9/2021

Artists and craft makers across the Highlands, Moray and the Western Isles can apply for bursaries of up to £750 for their creative development.   The Visual Artist and Craft Makers Awards (VACMA) are funded by Creative Scotland in partnership with Inverness Museum and Art Gallery (IMAG) and can support artists at all stages of their career.
[Local Authority]
3/9/2021

A planned Family Music Day in Inverness has been postponed, High Life Highland has said.   Due to take place on September 11 in Bellfield Park, a decision was taken following careful monitoring of the evolving Covid-19 situation across the Highlands.
[Educational Institutions]
30/8/2021

A letter has been sent to parents and guardians of pupils in S1 and S3 at Wick High School on Friday 27th August 2021.   Dear Parent or Guardian, We have identified a possible case of COVID-19 in a pupil in your child's year group.
[Local Authority]
27/8/2021

The Highland Council has today (27 August 2021) welcomed Scottish Government's publication of a forward-thinking report on coastal change for the area in East Sutherland stretching from Golspie to Coul.  It provides a summary of the latest ‘Dynamic Coast' science and is intended to support key partners in developing and implementing a response, which could include resilience and adaptation measures.