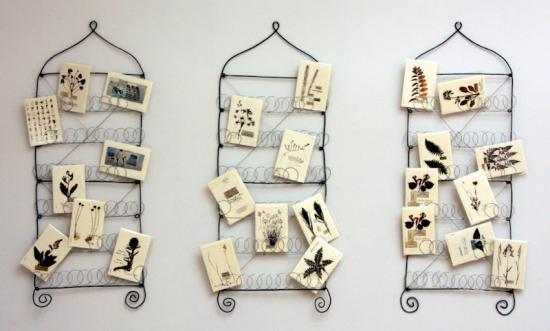 Joanne's handmade linen paper, mixed media artwork, greetings cards and t-towels printed with images of locally collected plants from Robert Dick's pressed herbarium collection - many place names are are listed on the plant labels and written in beautifull copper-plate handwriting by Robert Dick - you might find that Robert Dick passed by your house 150 years ago! A series of unique aprons inspired by his work as a baker, as well as gift boxes tied with traditional red & white bakers twine - all very festive - ready for you to fill.

Make your gifts unique this Christmas?

Paper Wrappers & Herbarium Sheets is an exhibition by Joanne B. Kaar at Caithness
Local artist Joanne B. Kaar has been working with the curator of Caithness Horizons over the last few years to help document, photograph and digitise the botanical specimens and paper wrappers contained within the Robert Dick Herbarium. Together they selected 60 of the herbarium specimens, which Joanne has printed onto her own handmade papers. All 60 are on display at Caithness Horizons.

Joanne, inspired by the work and personal life of Robert Dick the Thurso baker and botanist, has created new work for this exhibition to interpret the story of Robert Dick's life from an artist's perspective. She has designed a series of adverts that relate to three important events in Robert Dick's life that involve flour. Robert read widely, attended local lectures and had an interest in phrenology. He was well known locally for his biscuits and parliament cakes or "parlies".
Joanne has up-dated his image and also spent time in the shop of Reids of Caithness, drawing their cakes and incorporating some of their large empty brown paper flour sacks which she stitched closed with the bakers twine. Reids strawberry tarts are one of her favourite cakes!

Since graduating with an MA (Textiles Department) from Manchester Metropolitan University in 1992, Joanne has continued to experiment with fibre arts, particularly papermaking by hand. Most of Joanne's papers are rag based - Sheila Roderick from the Scalpay Weaving Shed in the Western Isles, sends Joanne all of her waste linen fibre to make into paper. She has completed many residencies including at the Chaoyang University and the Su-Ho Paper Museum in Taiwan. Last year Joanne's work was accepted for juried exhibitions in Korea, Tasmania, Germany, the United States of America and the United Kingdom, including VAS, held in The Royal Scottish Academy, Edinburgh. Earlier this year twenty paper-makers from around the world spent a week at Joanne's Studio in Dunnet to share skills, ideas and inspirations.

Caithness Horizons is home to the Robert Dick Herbarium. In 2011 Caithness Horizons secured grant aid from the Association of Independent Museums (AIM) and Museums Galleries Scotland to start a project to improve the condition of the specimens in the Robert Dick Herbarium through remedial conservation treatment. This project will place over several phases. Phase 1 of the project started in June 2011 and the sixty most important specimens in the Herbarium have been taken to The Scottish Conservation Studio for conservation treatment by Helen Creasy ACR (Paper and Photograph Conservator).

Talks have taken place on the possibility of reopening Thurso's Caithness Horizons which closed last week due to financial problems.   The operators of the museum and art gallery said increasing running costs and reduced income had made the running of the site "unsustainable".
[Visitor Attractions]
24/1/2018

A group of five staff members from Caithness Horizons have successfully completed an EDI National Award in Cultural and Heritage Venue Operations.  Caithness Horizons is the only museum in the Highlands to have staff that have achieved this award.