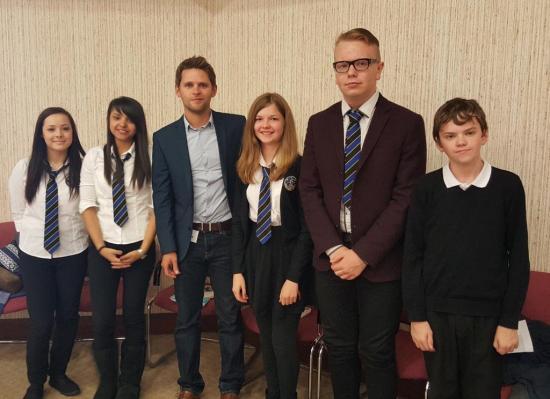 The progress of ICT learning by pupils at Wick High School is bucking national trends as more girls at the school take part in the "Apps for Good" programme and teams of boys and girls from the school win UK competitions.

Five pupils, Leanne Cormack, Megan Shearer, Konrad Szewczyk, Ellora James, John Sutherland and their Teacher, Chris Aitken impressed Members of the Council's Education, Children and Adult Services Committee with presentations about their experiences in developing Apps and participating in the "Apps for Good" final at London.

Drew Millar, Chair of Education, Children and Adult Services Committee said: "I congratulate the pupils and Mr Aitken on their achievements which are extremely impressive. Not only have they been placed and won categories at national level I am impressed that they have made a sale here at our council meeting which goes to show how professional and commercial they are!"

The pupils presented their Apps:
• "Cattle Manager" App for farmers which won the ‘information category' and is now being produced commercially;
• “One Click Politics” which won its category at UK level;
• “Pass it On” connecting charities and local people to donate goods required;
• “Envirocache” - a fun and educational way of getting children out of doors to engage in exercise.

Three pupils from Wick (among 112 from the EU) also won awards to attend a summer school in London called “Outbox Incubator”.

Teacher, Chris Aitken explained: “Apps For Good” is a UK wide initiative where students design Apps during curriculum time and during after school activities to engage their passions and use it as a driver in their course works. Six teams from Wick in the finals comprised girls which is bucking the national trends in gender participation. Apps for Good create the next generation of problem solvers and digital makers creating technical ideas to change their world for good. While developing their Apps, pupils learn design, business and presentation skills as well as the social skills of working in teams and personal development throughout the year at school.”

Vice Chair of ECAS Committee, Councillor Biz Campbell thanked the pupils for their presentations, she said: “Wick High pupils have clearly demonstrated that rurality is not a handicap to learning and progress. Wherever you live, you can compete against them all and win. I congratulate you on your success which I am sure has not only educated but also enlightened you.”

Councillor Fiona Robertson, Vice Chair of ECAS added: “Finding an App that has not been developed must be very difficult and is a great achievement in itself. I am very impressed at the pupils' creativity and imagination and I welcome the number of girls involved at Wick High which is bucking the trend in the tradition of mainly boys taking part in computing.”

Responding to the pupils' presentation, Caithness Civic Leader, Councillor Gail Ross, added: “It makes me proud to be a Wicker today. Your presentations were excellent and you are really good role models for Wick, Highland and young people across the whole of the UK. We are very lucky to have Teachers like Chris Aitken in Highland.”

The £48.5m Wick Community Campus built by Morrison Construction has been announced as a finalist at the Royal Town Planning Institute (RTPI) Awards for Planning Excellence 2018.   The project is entered in the category for "Excellence in Planning for a Successful Economy" against eight other finalists from across the UK with the winner to be announced during a ceremony at Milton Court Concert Hall on 24 May 2018.
[Educational Institutions]
24/4/2017

Around 400 pupils and teachers attending Newton Park Primary school and Nursery at Wick Campus in Wick will walk to their new school on Wednesday 26 April setting off at 9am from the Old Pulteneytown Academy building.   The procession of pupils in their new school uniforms will be led by Highland Bagpipers Alistair Miller and Chester Henry, a P7 pupil, along the new pedestrian access path and ramp down to the new building.
[Educational Institutions]
16/1/2017

The property is located in a pleasant residential area and is approximately a 5 minutes walk from Wick railway station and the Caithness General Hospital.   The facilities of Wick town centre and the expanding Wick Harbour are approximately a 10 minute walk.
[Local Authority]
15/7/2014