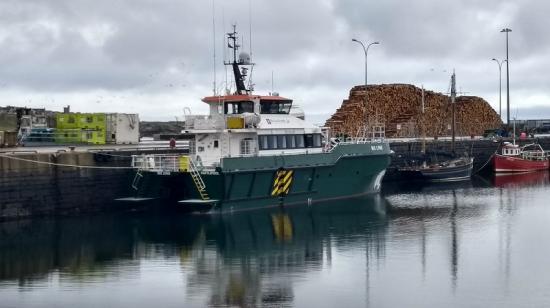 Today at Wick Harbour 'Rix Lynx'could be seen tied up. Wick Harbour is fast becoming a hive of activity with the work now well underway at the former Steven's yard.

'Rix Lynx' is an offshore wind-farm catamaran crew and small-goods transfer vessel and is the first of a likely small fleet of such vessels that will be using the port as works continue at, and for operational needs for the lifetime of, the Beatrice offshore wind-farm.

The work boats are likely to carry crews of up to 10 and Willie Watt of Subsea7 recently predicted there could be as many as 12 or more of these work boats based at Wick harbour.

With the fleet assembled off the Caithness coast things are certainly developing according to the schedule previously announced.

Wick Harbour Authority's ambitious plans to attract new jobs to the area from the offshore wind industry have received a boost with the combined support of £450,000 from two partners in the Caithness & North Sutherland Regeneration Partnership (CNSRP).   The Harbour Authority is positioning the port to attract business from the two large offshore wind developments in the Moray Firth, and is currently working on a multi-phase programme to ensure that its facilities meet the requirements of industry.
[Marine Services]
14/6/2013

The Highland Fisheries Local Action Group (FLAG) has awarded funding of £30,098 to Wick Harbour Authority for the purchase of additional infrastructure to increase the capacity at Wick Marina from 72 to 84 berths.   Interpretation panels will also be installed in the area around the harbour to promote the maritime heritage of Wick and provide information regarding the diversification process to create a modern port.