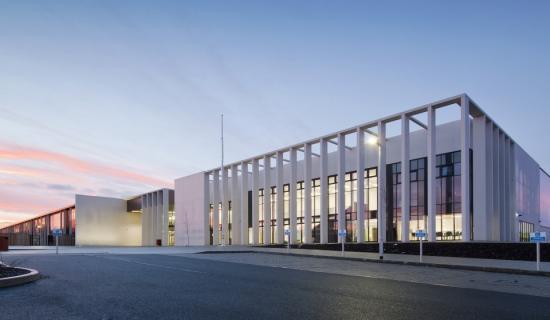 Around 400 pupils and teachers attending Newton Park Primary school and Nursery at Wick Campus in Wick will walk to their new school on Wednesday 26 April setting off at 9am from the Old Pulteneytown Academy building.

The procession of pupils in their new school uniforms will be led by Highland Bagpipers Alistair Miller and Chester Henry, a P7 pupil, along the new pedestrian access path and ramp down to the new building. Parents and carers have been invited to watch the procession as the children go into the playground and then into their new school.

"Looking forward, we have also planned an afternoon for parents, grandparents and carers to visit Newton Park Primary on Tuesday 2nd May when the children will be hosts and show their parents around the building."

It is not just the primary aged children who are eagerly looking forward to their new premises. Fiona Grant, Head Teacher of Wick High School added: "For well over a century Wick High School served the local community of East Caithness in its premises on West Banks Avenue. Now, our staff and pupils look forward with great excitement and enthusiasm to the next chapter of our school's rich history as we move to our state-of-the-art building. The move marks the culmination of months of preparatory work in making the transition from old to new, most recently involving each pupil having a guided tour of the school and community facilities. Pupils have been fully briefed on what to expect on their first day in the new school and our website will hold the most up-to-date information for parents and carers. Once we have settled in to our new surroundings we will hold an official open day and a series of commemorative events to mark this historic moment."

Michael Padzinski, Chief Executive of hub North Scotland, said: “We are delighted that the students and teaching staff have an excellent environment to learn and develop in. We have worked closely with The Highland Council, Morrison Construction and key stakeholders to create a world class, modern learning Campus that will be at the heart of the community for years to come."

The following link takes you to a video which previews the superb new facilities at Wick Campus. An open day is being planned for members of the community to view the building.

The £48.5m Wick Community Campus built by Morrison Construction has been announced as a finalist at the Royal Town Planning Institute (RTPI) Awards for Planning Excellence 2018.   The project is entered in the category for "Excellence in Planning for a Successful Economy" against eight other finalists from across the UK with the winner to be announced during a ceremony at Milton Court Concert Hall on 24 May 2018.
[Educational Institutions]
16/1/2017

The property is located in a pleasant residential area and is approximately a 5 minutes walk from Wick railway station and the Caithness General Hospital.   The facilities of Wick town centre and the expanding Wick Harbour are approximately a 10 minute walk.
[Educational Institutions]
29/8/2015

The progress of ICT learning by pupils at Wick High School is bucking national trends as more girls at the school take part in the "Apps for Good" programme and teams of boys and girls from the school win UK competitions.   Five pupils, Leanne Cormack, Megan Shearer, Konrad Szewczyk, Ellora James, John Sutherland and their Teacher, Chris Aitken impressed Members of the Council's Education, Children and Adult Services Committee with presentations about their experiences in developing Apps and participating in the "Apps for Good" final at London.
[Local Authority]
15/7/2014